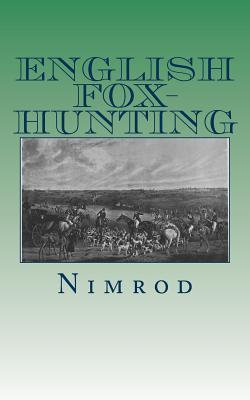 
Not On Our Shelves—Ships in 1-5 Days
(This book cannot be returned.)
It is a hackneyed enough remark, that both ancient and modern writers make sad work of it when they attempt a description of heaven. To describe a run with fox-hounds is a not much-easier task; but to make the attempt with any other county than Leicestershire, in our eye, would be giving a chance away. Let us then suppose ourselves at Ashby Pasture, in the Quorn country, with Mr. Osbaldeston's hounds. Let us also indulge ourselves with a fine morning in the first week of February, and at least two hundred well-mounted men by the covers side. Time being called-say a quarter past eleven, nearly our great-grandfathers' dinner hour-the hounds approach the furze-brake, or the gorse, as it is called in that region. "Hark in, hark " with a slight cheer, and perhaps one wave of his cap, says Mr. Osbaldeston, who has long hunted his own pack, and in an instant he has not a hound at his horse's heels. In a very short time the gorse appears shaken in various parts of the cover-apparently from an unknown cause, not a single hound being for some minutes visible. Presently one or two appear, leaping over some old furze which they cannot push through, and exhibit to the field their glossy skins and spotted sides. "Oh you beauties " exclaims some old Meltonian, rapturously fond of the sport. Two minutes more elapse: another hound slips out of cover, and takes a short turn outside, with his nose to the ground and his stern lashing his side thinking, no doubt, he might touch on a drag, should Reynard have been abroad in the night. Hounds have no business to think, thinks the second whipper-in, who observes him; but one crack of his whip, with "Rasselas, Rasselas, where are you going, Rasselas? Get to cover, Rasselas"; and Rasselas immediately disappears. Five minutes more pass away. "No fox here," says one. "Don't be in a hurry," cries Mr. Cradock, "they are drawing it beautifully, and there is rare lying in it " These words are scarcely uttered, when the cover shakes more than ever. Every stem appears alive, and it reminds us of a corn-field waving in the wind. In two minutes the sterns of some more hounds are seen "flourishing" above the gorse.* "Have at him there again, my good hounds-a fox for a hundred " reiterates the Squire+-putting his finger in his ear, and uttering a scream which, not being set to music, we cannot give here. Jack Stevens (the first whipper-in) looks at his watch. At this moment, 'John White, ' 'Val. Maher, ' 'Frank Holyoake' (who will pardon us for giving them their noms de chasse) and two or three more of the fast ones, are seen creeping gently on towards a point at which they think it probable he may break. "Hold hard there," says a sportsman; but he might as well speak to the winds. "Stand still, gentle men; pray stand still," exclaims the huntsman; he might as Well say so to the sun. During the time we have been speaking of, all the field have been awake-gloves put on-cigars thrown away-the bridle-reins gathered well up into the hand, and hats pushed down upon the brow.