A Crisis of Democratic Accountability: Public Libel Law and the Checking Function of the Press (Paperback) 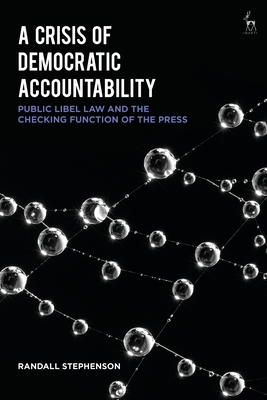 A Crisis of Democratic Accountability: Public Libel Law and the Checking Function of the Press (Paperback)


Not On Our Shelves—Ships in 1-5 Days
This book undertakes a comparative study of the public interest and political speech defences in defamation law, particularly from the perspective of the misuse of democratic free expression justifications. Specifically, it argues that the law and legal approaches taken by leading courts and legislatures in the UK, Australia, New Zealand, Canada, and the United States - five common law comparators - are undertheorised, lack adequate criteria for determining the correct form of the defence, and would benefit from a more precise understanding of 'democracy', 'accountability', and 'representation'. The book will be of great interest to scholars of free speech, defamation and public law.
Randall Stephenson is a scholar of defamation law and public law. He completed his DPhil in law at the University of Oxford in 2017. Before attending Oxford, he studied first amendment jurisprudence at Columbia University (LLM) and practiced litigation at Osler, Hoskin & Harcourt LLP in Toronto, Canada.