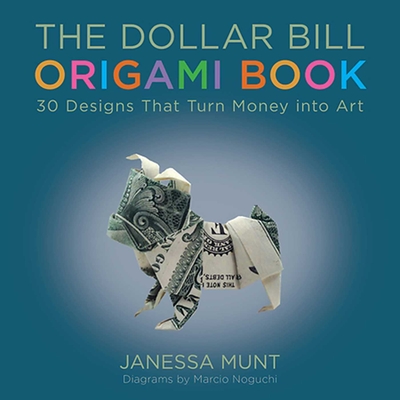 Take your regular origami hobby to the next level with dollar bill origami—the art of folding beautiful designs with the humble dollar bill. The unique size, shape, texture, and pattern of dollar bills provide a world of possibilities to create bigger and better models you’ve never seen before!

Origami artist Janessa Munt provides 30 of her very own dollar bill origami designs, each of them intricate, highly unique, and full of personality. Learn how to fold a single uncut dollar bill into a rose or create a model of a shark complete with eyes and teeth from the patterns on the dollar bill. Master your money and put together other models such as a curious bulldog, a tyrannosaurs rex mid-roar, a Thanksgiving turkey, a mermaid, Capricorn the goat, and many more!

Each model is accompanied by clear and concise step-by-step diagrams as well as full color photographs of particular steps. With models categorized according to difficulty, there is something for readers of every skill level, whether you are a beginner, intermediate, or advanced folder. Throw yourself into a new hobby, impress your friends, and turn that spare dollar bill in your pocket into a whimsical, stunning work of art.
Janessa Munt has been folding for over ten years, with hundreds of designs to her name. For over a month, she ran the blog Daily Dollar Doodles, where she designed a new dollar bill origami model every day. She previously authored Pokémon Origami, and her models have featured in several convention books, including the annual 2015 Origami Collection by OrigamiUSA. Janessa lives in Corvallis, Oregon.

Marcio Noguchi is a master diagrammer who has collaborated with many origamists on books such as Extreme Origami, Dollar Origami, Dollar Bug-gami, and Origami Master Class Flowers. He lives in Mamaroneck, New York.