Napoleon's Hemorrhoids: And Other Small Events that Changed History (Paperback) 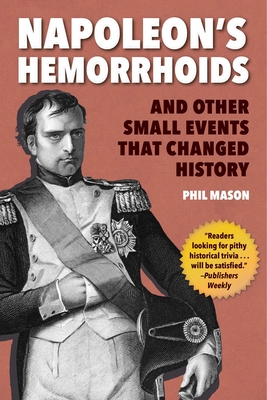 Napoleon's Hemorrhoids: And Other Small Events that Changed History (Paperback)


Not On Our Shelves—Ships in 1-5 Days
New York Times Bestseller! A compendium about tiny ripples that created big waves in history. What was Hitler’s real name? Which famous artist was mistakenly thought to be stillborn, until his uncle revived him by blowing cigar smoke in his face? And what were Albert Einstein’s last words?

Hilarious, fascinating, and a roller coaster of dizzying historical what-ifs and lesser-known anecdotes, Napoleon’s Hemorrhoids is a potpourri for serious historians and casual history buffs that reveals how much of history turned out to be the consequences of fortune, accident, or luck.

Here, you’ll learn that Communist jets were two minutes away from opening fire on American planes during the Cuban missile crisis, when they had to turn back as they were running out of fuel. You’ll discover that before the Battle of Waterloo, Napoleon’s painful hemorrhoids prevented him from mounting his horse to survey the battlefield. You’ll learn that Nixon’s White House taping system was accidentally revealed by an aide, causing his downfall in the Watergate scandal. You’ll discover how Coca-Cola’s most famous advertisement, launched in 1971 was inspired by an unplanned all-night layover at an Irish airport.

(And . . . no one actually knows Einstein’s last words. They were in German, a language his nurse did not speak.)

A treasure trove of astonishing anecdotes about the tiny ripples that created big waves in history, Napoleon’s Hemorrhoids reveals how our most famous incidents, best-loved works of art, and most accepted historical outcomes are simply twists of fate.
Phil Mason has amassed one of the world’s largest private collections of cuttings and books chronicling bizarre stories. He is the author of Mission Accomplished! and How George Washington Fleeced the Nation. He lives in England.
“Mason writes well, and readers looking for pithy historical trivia to share with friends will be satisfied.” —Publishers Weekly
“I started turning pages and couldn’t stop.” —Spectator