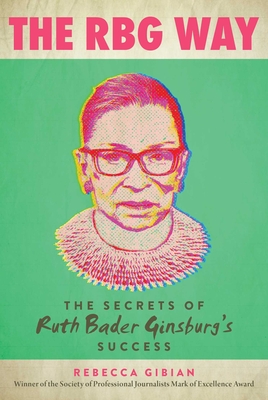 
In Stock—Click for Locations
Understanding and applying the wisdom of Justice Ruth Bader Ginsburg!

Given her incredible tenure as a Supreme Court justice as well as her monumental impact on the modern women’s rights movement, Ruth Bader Ginsburg has become one of the most prominent political leaders of today. To complement her judicial significance, she has also become one of the most culturally popular political figures in US history. Not only has her workout routine gone viral (and been detailed in a book by her trainer), but RBG’s story has been featured in multiple critically acclaimed films.

Organized into three parts and then broken down into more specific chapters within each part, The RBG Way offers wisdom from Justice Ginsburg, based on comments she has made on particular topics of importance. Insight is offered on subjects such as women’s rights, creating lasting partnerships, overcoming hardship, how to be brave, and how to create lasting change. Rebecca Gibian offers her seasoned journalistic perspective to shed light on beliefs that RBG holds strongly, in a manner that is both comprehensive and accessible.

Rebecca Gibian is an award-winning journalist based in Brooklyn, NY. Her work has appeared in the Associated Press, The Atlantic, and VICE, among others. Her reporting focuses on women nationally and internationally and she has reported from countries including Iraq, South Africa, and Indonesia.
“How did RBG become a ‘Supreme’ rock star? Read Rebecca Gibian’s charming and insightful book. It’s all there, secrets and all, told in delightful, accessible style.”
—Marvin Kalb, senior fellow at the Brookings Institution and author of Enemy of the People

“You might think, given all of the attention that Justice Ginsburg has received in recent years, that there is little more that can be said about her life and career. But Gibian has a fresh perspective on matters, and extracts a number of practical and useful lessons from those well-known facts in a way that both illuminates RBG’s achievements and can serve as a model for others seeking to emulate her success.”
—David Post, two-time former clerk for RBG

“A self-help book [that] distills the experiences and inspiration of the Supreme Court justice into a series of life lessons…Good advice from a life well lived.”
—Kirkus Reviews

"If you yearn to achieve success like Ruth Bader Ginsburg, this is your book. . . A road map for those who aspire to become notorious."
—Booklist