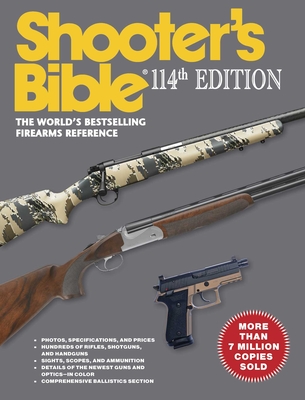 
Backordered
Published annually for more than eighty years, the Shooter’s Bible is the most comprehensive and sought-after reference guide for new firearms and their specifications, as well as for thousands of guns that have been in production and are currently on the market.

With more than seven million copies sold, this is the must-have reference book for gun collectors and firearm enthusiasts of all ages. Nearly every firearms manufacturer in the world is included in this renowned compendium. The 114th edition also contains new and existing product sections on ammunition, optics, and accessories, along with updated handgun and rifle ballistic tables and extensive charts of currently available bullets and projectiles for handloading.
Jay Cassell, editorial director at Skyhorse Publishing and the editor of this compendium, has hunted all over North America. He has written for Field & Stream, Sports Afield, Outdoor Life, Petersen’ s Hunting, Time, and many other publications and has published numerous books. He lives in Katonah, New York.