Auto Claims without Attorneys: A Guide to Settlement (Paperback) 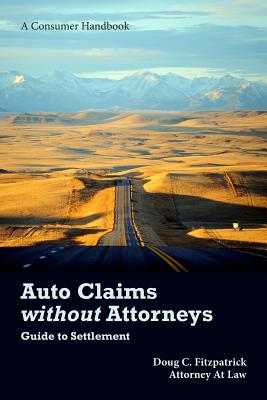 Auto Claims without Attorneys: A Guide to Settlement (Paperback)


Not On Our Shelves—Ships in 1-5 Days
(This book cannot be returned.)
Injuries from many auto accident claims are not serious enough to be of interest to attorneys who customarily represent clients on a contingent fee basis. Minor injuries result in modest settlements and even more modest contingent fees. Those with less serious injuries are left to go it alone with the claims adjuster. As a result, claims are settled for a fraction of what they're worth. This book provides an easy step-by-step approach to negotiate and settle a personal injury claim without the cost of an attorney. It includes appendices with sample letters and other very helpful materials. Drawing from Doug Fitzpatrick's years of experience as an instructor, private investigator, and attorney, the road map in this book will shed light on what needs to be done to get reasonably compensated by the insurance company without an attorney as well as the costs associated with legal representation. It is for the routine auto claim in which injuries are minor or modest, but restitution is nonetheless due and owing.
Doug Fitzpatrick was born and raised in Essex County, New Jersey, a suburb of New York City. After working his way through law school as a private investigator, Doug received his law degree from Chicago-Kent College of Law in 1975. Among his clients were notable Chicago personal injury attorneys. Doug also worked undercover for several major insurance companies to investigate fraud and abuse of the workers' compensation system. After graduation from law school, Doug moved to Arizona where he passed the bar exam in 1977. He taught law at Phoenix College while launching his private practice. Doug has since practiced law in Arizona's state and federal courts for almost 40 years. In the early years, Doug had a general civil practice in which he performed a wide range of legal services. The emphasis of Doug's practice shifted to the personal injury arena in which auto accident claims predominated. Doug has tried hundreds of cases and litigated a wide variety of legal matters.