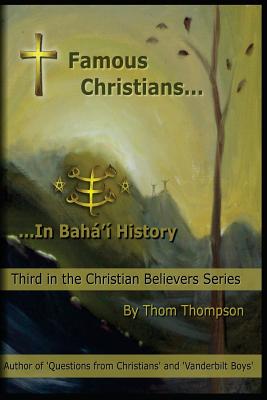 
Not On Our Shelves—Ships in 1-5 Days
(This book cannot be returned.)
Third in a series entitled: Christian Believers Series. The first of the series was 'Questions from Christians: About Baha'u'llah and the Baha'i Faith.' The second in the series: 'Every Good Thing, ' contained selections from Baha'i Scriptures especially selected for Christian Believers. This book, the third in the series is 'FAMOUS CHRISTIANS: IN BAHA'I HISTORY.' This book tells of an unusual fact, namely, that there were so many well known Christians (and some not so well known) who played important roles in the unfolding of the Baha'i Faith. From Captains to Kings, from famous authors to an American Secretary of State, from Embassy Diplomats to artists of all kinds (including famous dancers, singers and musicians, from Queens to commoners, from Missionaries to Intelligence Officers, from Scientists to Generals, these and many others show up in the history and the development of the world's newest religion - the Baha'i Faith. I did not expect to find them there, but there they were This is their story.
With a background of a Christian home and preparation for the Christian Ministry, I encountered Baha'u'llah and the Baha'i Faith while in graduate school at Vanderbilt University School of Divinity. After declaring my faith in Baha'u'llah, in my understanding that He was the Return of Christ's Spirit to the world, I went back to graduate school to get an MSW in Social Work. Most of my career has been in university teaching and private practice as a psychotherapist. There was a moment of diversion when I starred in two television shows. One was 'Family Counselor, ' shown in Baltimore and several East Coast cities for two years in the early 70's). The other was called 'Crisis Counselor, ' made in Hollywood and shown nationwide on 'Lifetime' cable in the decade of the 80'. After the media diversion, I like to tell people that I have retired three times, once to write these books, once to work in a prison for two years, once to work as a family therapist on military bases in Europe and the US. I came back out of retirement once again to do 'Critical Incidents, ' where I am sent out to counsel people and institutions where some traumatic event has occurred, such as bank robbery or the death of a beloved employee, a shooting, etc. Currently (2017) I am still writing and speaking, doing workshops and doing what I have loved all along to do, namely, connecting with people and sharing and receiving thoughts and ideas with them