Reputation Capital: How to Navigate Crises and Protect your Greatest Asset (Paperback) 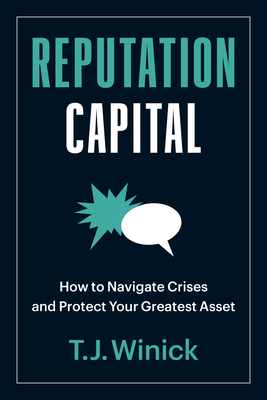 Reputation Capital: How to Navigate Crises and Protect your Greatest Asset (Paperback)


Not On Our Shelves—Ships in 1-5 Days
A longtime broadcast journalist, ABC News correspondent, and business communication strategist shows how you can craft an honest and authentic response to any scandal, rather than try to deny it, and ultimately bolster your brand.

In two decades as a television reporter, T. J. Winick covered many scandals. The biggest mistake he saw brands make was to try to “make it go away” by refusing to apologize, declining to comment, or going on the attack—anything to deflect attention. Often that kind of response becomes a scandal of its own.

In his book, Winick argues instead for transparency, honesty, authenticity, and empathy. Handled correctly, the way you address an egregious violation of your standards can increase your reputation capital. It can remind people of what those standards are and how strongly you believe in them.

Drawing on his intimate insider knowledge of the media, Winick addresses every conceivable aspect of how to respond to a scandal. He includes his Ten Crisis Commandments—universal dos and don’ts—and the seven qualities for an effective response. Using dozens of examples, he covers critical issues such as choosing when and how to apologize and when not to, creating a crisis communication plan and forming a response team, making the press your ally; choosing the right social media channel to deliver your message, navigating controversial social issues, and much more.

Winick’s experience covering brands in crisis and then defending them makes this book an invaluable resource. “I have been both the hunter and the hunted,” he writes. If you’ve built your reputation capital through years of living the ideals you espouse, this book will help you protect and defend it when that inevitable crisis strikes.
T. J. Winick leads the crisis practice at Issues Management Group, an award-winning public relations and digital marketing agency headquartered in Boston. Winick was a correspondent and anchor for ABC News, during which he reported across platforms including NewsOne, Nightline, World News Now, and Good Morning America. He also worked as a reporter in local news for ten years in such major markets as Pittsburgh and Boston. His insights on crisis communications have appeared in numerous outlets, including Forbes, PR Week, PRNews, and O’Dwyer’s.
“In our 24/7 multichannel media landscape, leaders aren’t managing a crisis if they aren’t communicating effectively. T. J. teaches you how to master the message.”
—Alisyn Camerota, Anchor, CNN

“T. J. has been critical in guiding me—a white male boomer attempting to navigate the real estate business and professional sports in the 21st century—to lean into integrity, empathy, transparency, and equity. This is a must-read.”
—Larry Gottesdiener, Chairman, Atlanta Dream (WNBA) and Northland Investment Corporation

“T.J. skillfully strikes a balance for those issues tried in the court of law and the court of public opinion.”
—Dave Aronberg, State Attorney for Palm Beach County, Florida

“How a brand responds to a crisis often determines the media narrative. Reputation Capital is a powerful how-to guide for leaders navigating these moments of truth.”
—Linsey Davis, Anchor and Correspondent, ABC News

“Whether readers are grad students or executives, they will learn hard-earned lessons from a pro.”
—Elizabeth Maw, President, Presidio Graduate School