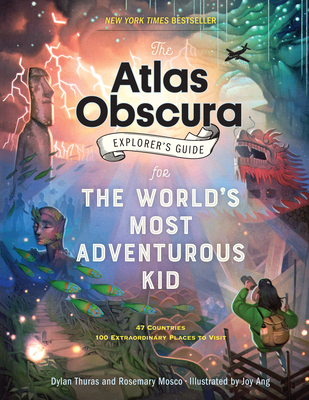 
On Our Shelves Now at:
New York Times bestseller, now in paperback!

The Atlas Obscura Explorer’s Guide for the World’s Most Adventurous Kid is a thrilling expedition to 100 of the most surprising, mysterious, and weird-but-true places on earth.

For curious kids, this is the chance to embark on the journey of a lifetime—and see how faraway countries have more in common than you might expect! Hopscotch from country to country in a chain of connecting attractions: Explore Mexico’s glittering cave of crystals, then visit the world’s largest cave in Vietnam. Peer over a 355-foot waterfall in Zambia, then learn how Antarctica’s Blood Falls got their mysterious color. Or see mysterious mummies in Japan and France, then majestic ice caves in both Argentina and Austria.

As you climb mountains, zip-line over forests, and dive into oceans, this book is your passport to a world of hidden wonders, illuminated by gorgeous art.

Dylan Thuras is the cofounder and creative director of Atlas Obscura. He lives in Rosendale, NY.
Rosemary Mosco is a science communicator, acclaimed cartoonist, and speaker on all things bird. She's the creator of the webcomic Bird and Moon and has authored many science books for young people, including co-authoring the bestselling Atlas Obscura Explorer’s Guide for the World’s Most Adventurous Kid. She lives in Massachusetts.
Joy Ang is a freelance artist, children’s book illustrator, and character designer for video games and the animated television series Adventure Time. She lives in Seattle.