The Art of Trial Warfare: Winning at Trial Using Sun Tzu's The Art of War (Paperback) 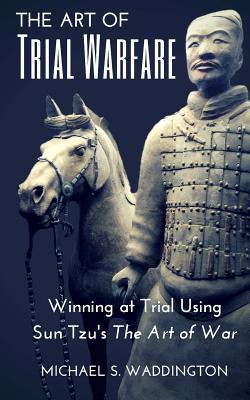 The Art of Trial Warfare: Winning at Trial Using Sun Tzu's The Art of War (Paperback)


Not On Our Shelves—Ships in 1-5 Days
(This book cannot be returned.)
Are you struggling to find your stride as a trial attorney? Do you fail, even when you know you are doing everything the "right" way? Then there is only one question to answer: Are you ready to live by a code and system that will work in any situation? Using Sun Tzu's revered The Art of War as a point of inspiration and reference, Michael Waddington offers up bite-size pieces of advice, snippets of strategy, and countless nuggets of wisdom he's accumulated over hundreds of trials. Instead of dwelling on the logistics and technicalities of trial practice, The Art of Trial Warfare illustrates the habits of a successful trial attorney. It speaks eloquently to the art of attack, of exploiting weaknesses, and of leveraging each success. After time, the wisdom becomes muscle memory, instilling habits that will improve any trial attorneys game. Trial is war. Trial lawyers would be well-served to dip into this handy resource time and time again. It serves as an excellent overall philosophy, as well as the ultimate pep talk.
Michael Waddington is a criminal defense lawyer who has successfully defended cases in military courtrooms around the world, including Japan, South Korea, Germany, Iraq, Bahrain, Italy, England, and across the United States. He's been involved in some of the highest profile court martial cases-from the "War on Terror" to the "War on Sex Assault"-and has been reported on and quoted by hundreds of major media sources worldwide. He has provided consultation services to CNN Investigative Reports, 60 Minutes, Katie Couric, ABC Nightline, the BBC, German Public Television, CBS, and the Golden Globe winning TV series, "The Good Wife." He appeared in a major CNN Documentary, 2009's "Killings at the Canal," and some of his cases have been the subject of books and movies, including the Academy Award Winning Documentary "Taxi to the Dark Side," and the 2013 documentary, "The Kill Team." Since 2013, Mr. Waddington has been an annual contributor to the American Bar Association's publication, "The State of Criminal Justice." He is also a fellow of the American Board of Criminal Lawyers (ABCL), and was voted a Super Lawyer in Georgia. Mr. Waddington, a former Army Judge Advocate General Corps (JAG) officer, served two tours as an Army defense lawyer, worked as a Special Assistant United States Attorney, and as an Army Chief of Military Justice. He enlisted in 1993 and was commissioned as an officer in 1997. He left the Army with an Honorable Discharge in 2006.