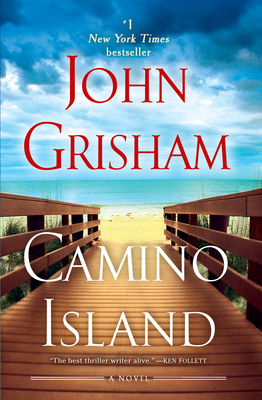 This is book number 1 in the Camino series.

A gang of thieves stage a daring heist from a vault deep below Princeton University’s Firestone Library. Their loot is priceless, impossible to resist.

Bruce Cable owns a popular bookstore in the sleepy resort town of Santa Rosa on Camino Island in Florida. He makes his real money, though, as a prominent dealer in rare books. Very few people know that he occasionally dabbles in unsavory ventures.

Mercer Mann is a young novelist with a severe case of writer’s block who has recently been laid off from her teaching position. She is approached by an elegant, mysterious woman working for an even more mysterious company. A generous monetary offer convinces Mercer to go undercover and infiltrate Cable’s circle of literary friends, to get close to the ringleader, to discover his secrets.

But soon Mercer learns far too much, and there’s trouble in paradise—as only John Grisham can deliver it.
John Grisham is the author of forty-seven consecutive #1 bestsellers, which have been translated into nearly fifty languages. His recent books include The Judge's List, Sooley, and his third Jake Brigance novel, A Time for Mercy, which is being developed by HBO as a limited series.

Grisham is a two-time winner of the Harper Lee Prize for Legal Fiction and was honored with the Library of Congress Creative Achievement Award for Fiction.

When he's not writing, Grisham serves on the board of directors of the Innocence Project and of Centurion Ministries, two national organizations dedicated to exonerating those who have been wrongfully convicted. Much of his fiction explores deep-seated problems in our criminal justice system.

“A happy lark [that] provides the pleasure of a leisurely jaunt periodically jolted into high gear, just for the fun and speed of it.”—The New York Times Book Review

“Fans will thrill with the classic chase and satisfying ending; and book lovers will wallow in ecstasy.”—The Florida Times-Union