Germany's Russia Problem: The Struggle for Balance in Europe (Paperback) 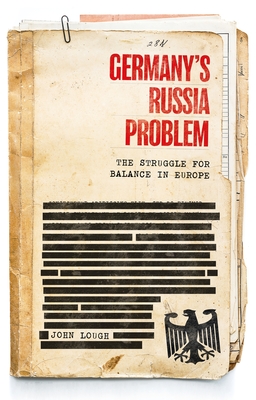 Germany's Russia Problem: The Struggle for Balance in Europe (Paperback)


Not On Our Shelves—Ships in 1-5 Days
The relationship between Germany and Russia is Europe's most important link with the largest country on the continent. But despite Germany's unparalleled knowledge and historical experience, its policymakers struggle to accept that Moscow's efforts to rebalance Europe at the cost of the cohesion of the EU and NATO are an attack on Germany's core interests. This book explains the scale of the challenge facing Germany in managing relations with a changing Russia. It analyses how successive German governments from 1991 to 2014 misread Russian intentions, until Angela Merkel sharply recalibrated German and EU policy towards Moscow. The book also examines what lies behind efforts to revise Merkel's bold policy shift, including attitudes inherited from the GDR and the role of Russian influence channels in Germany.
John Lough is an Associate Fellow of the Russia & Eurasia Programme at Chatham House (since 2009) and a regular commentator on Russian and Ukrainian affairs. He spent six years with NATO managing information programmes aimed at Central and Eastern Europe, including a posting to Moscow, where he set up NATO's Information Office in Russia and was the first Alliance official to be permanently based in the country. He runs his own consultancy business, advising clients on political and investment risk in Russia, Ukraine and other countries of the former Soviet Union. He studied German and Russian literature at Cambridge University.