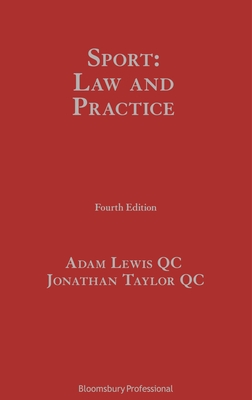 
Special Order—Subject to Availability
Sport: Law and Practice consolidates guidance across all the major practice areas of interest to solicitors and barristers practising sports law, as well as Universities, governing bodies, sports agencies, clubs and commercial firms. The new 4th Edition features updates to all the existing chapters with some restructuring to reflect modern practice, plus the addition of a number of new chapters, including: - Data protection - Public funding of sport - Best practice in sports governance - Effective sports regulation - Eligibility - Misconduct - Investigations and enquiries - Ticketing - Exploiting sports data - HMRC investigations, tax enquiries and disputes in the sports sector - ESports
Adam Lewis QC is a barrister at Blackstone Chambers. He is recognised as the leading expert on sports law at the Bar, and is ranked as the only Star Individual in this area by Chambers UK 2015. His sports law work covers the full range from the legality of governing bodies' rules and actions to disciplinary and drugs related work to, and from player/club disputes to the commercial exploitation of sport through broadcasting, sponsorship and merchandising. He has acted in many of the leading cases. Jonathan Taylor QC is co-head of Bird and Bird's Sport Group, based in London. He is one of the world's leading sports lawyers, advising nationally and internationally on cutting-edge commercial, regulatory and contentious issues across all major sports. He advises a wide range of sports bodies (including international and national governing bodies, public agencies, event organisers, leagues, clubs, and their commercial partners and agents) on commercial matters such as the exploitation of broadcasting and sponsorship rights, contentious matters including challenges to regulatory decisions, commercial disputes, and regulatory and disciplinary issues (including in particular match-sanctioning, match-fixing and doping issues).