This is the Canon: Decolonize Your Bookshelves in 50 Books (Hardcover) 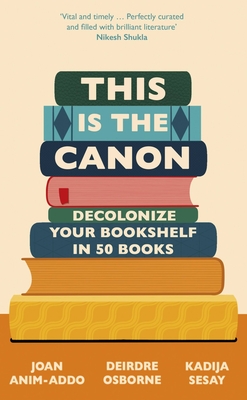 This is the Canon: Decolonize Your Bookshelves in 50 Books (Hardcover)


On Our Shelves Now at:
These are the books you should read. This is the canon.

Upending our traditionally white-dominated 'to be read' piles, Joan Anim-Addo, Deirdre Osborne and Kadija Sesay push to the fore the voices and cultural perspectives that demand a place on everyone's shelves.

From literary giants such as Toni Morrison, Salman Rushdie and Chinua Achebe to recent Man Booker Prize winners Paul Beatty and Bernardine Evaristo, the novels recommended here are in turn haunting and lyrical; innovative and inspiring; edgy and poignant. They are books that reflect the wide and diverse experiences of people from around the world, of all backgrounds and all races. They are books that represent voices that have for too long been silenced or side-lined.
Professor Joan Anim-Addo is an academic, poet, playwright and publisher. She is Professor Emerita of Caribbean Literature and Culture at Goldsmiths University, London, and the co-founder of the world-first MA in Black British Literature.

Dr Deirdre Osborne is Reader in English Literature and Drama at Goldsmiths University, London. She is committed to decolonising pedagogies and curriculum design and co-founded the world-first MA in Black British Literature. She is associate editor of Women's Writing.

Kadija Sesay MBE is a writer and editor, and the founder of SABLE LitMag and SABLE LitFest. She has edited several anthologies of work by writers of African and Asian descent including co-editing IC3:The Penguin Book of New Black Writing in Britain. Kadija's poetry, stories and essays have been published in the UK, USA and Africa.