How to Develop Your Psychic Abilities: Institute for Hermetic Studies Monograph Series (Paperback) 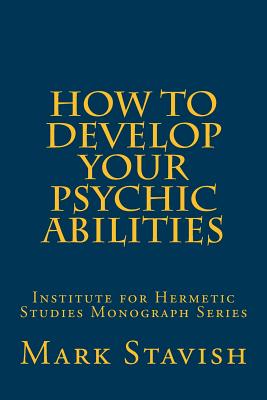 How to Develop Your Psychic Abilities: Institute for Hermetic Studies Monograph Series (Paperback)


Not On Our Shelves—Ships in 1-5 Days
(This book cannot be returned.)
How To Develop Your Psychic Abilities examines the historical and scientific exploration of the hidden dimensions of the human mind. Looking at the role of psychic phenomena in the occult practices dating to Late Antiquity to the scientific laboratories of modern universities, clear instructions on how to awaken, experience, and strengthen psychic abilities are given. The role of meditation, visualization, concentration, sense training, and vocalization of various prayers and mantra are revealed. In addition, select papers from early 20th century occult investigators that will be of interest to students of Rosicrucianism, Martinism, esoteric Freemasonry, and the Hermetic Order of the Golden Dawn are provided. This is an ideal book for those both new to the study of the development of psychic phenomena as well as experienced researchers.
Mark Stavish (Pennsylvania) is a respected authority in the study and practice of Western spiritual traditions. He is the author of several books, including The Path of Alchemy, Kabbalah for Health and Wellness, and Between the Gates - Lucid Dreaming, Astral Projection and the Body of Light in Western Esotericism and has been translated into over nine languages worldwide. He is the founder and Director of Studies at the Institute for Hermetic Studies (Wyoming, Pennsylvania) and the Louis Claude de St. Martin Fund. Alfred DeStefano III (Tulsa, OK) teaches mathematics at the university level. In addition to being a "Renaissance Man" of many varied and unique talents, he has assisted in the production of numerous esoteric publications.