The Alchemy of Cooking: Recipes with a Jungian Twist (Paperback) 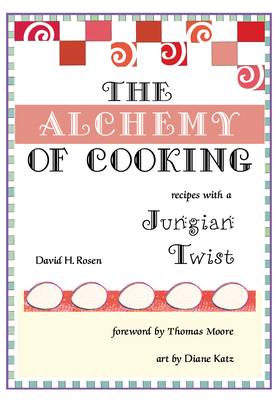 The Alchemy of Cooking: Recipes with a Jungian Twist (Paperback)

"It takes a brave person to write a cookbook these days," begins Thomas Moore (author of Care of the Soul: A Guide to Cultivating Depth and Sacredness in Everyday Life) in his foreword to The Alchemy of Cooking.

"In this book you will sense no heroics . . . What you get is a sophisticated man choosing to eat simply and inviting others to share in his culinary happiness. Chef as therapist."

"I was reminded of James Holman's Freud's Own Cookbook with its recipes for such psychological fare as "momovers' and 'Paranoid Pie.'"

Dr David H. Rosen is a physician, psychiatrist, and Jungian analyst. His interests include: finding meaning in suffering; dreams; spirituality as it relates to healing; and all kinds of creativity. David is the author of twelve books, including Transforming Depression: Healing the Soul through Creativity; The Tao of Jung: The Way of Integrity; Lost in the Long White Cloud: Finding My Way Home; Patient Centered Medicine: A Human Experience with Uyen Hoang; The Healing Spirit of Haiku with Joel Weishaus; Time, Love and Licorice: A Healing Coloring Storybook; and The Tao of Elvis. Dr Rosen is editor of the Texas A&M University Press twenty-volume Fay Book Series in Analytical Psychology. Rosen's books have been translated into many languages. David was born in 1945 in Port Chester, New York, and attended University of California, Berkeley and the University of Missouri School of Medicine. He received psychiatric training at the University of California, San Francisco and subsequent training in Jungian analysis. He was the initial holder of the McMillan Professorship in Analytical Psychology at Texas A&M University (the first of its kind in the world), and is now Affiliate Professor in Psychiatry at Oregon Health & Science University. Currently living in Eugene, Oregon, with his wife Lanara, David walks, paints and sees analytic patients. He also enjoys creating visual art, performing stand-up comedy, and writing haiku and ten-minute plays.