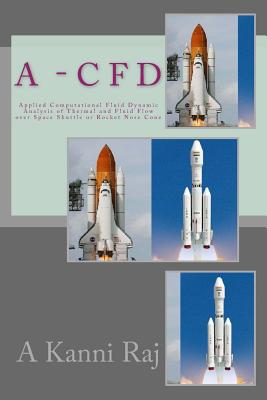 By A. Kanni Raj


Not On Our Shelves—Ships in 1-5 Days
(This book cannot be returned.)
A - C F D: Applied Computational Fluid Dynamic Analysis of Thermal and Fluid Flow over Space Shuttle or Rocket Nose Cone - is a simple book. In rocket is at a flight speed far greater than the speed of sound. This hypersonic flow is in high Mach number regime used to distinguish flow fields, phenomena and problems appearing at this speed. In high speed flows a conical shock wave is formed during the flow over the conical body whereas the bow shock wave is formed over the blunt body. High speed flow have high energy level, thus dissipate large amount of heat, resulting in high temperatures, which may even burn the surface. The nose cone should be built with an outer surface which should be able to withstand high temperature generated by aerodynamic heating and the shape of the nose cone must also be chosen for minimum drag. In this research project-based book, an attempt is made to calculate the flow parameters around the nose cone of hypersonic space shuttle. The effect of shock waves on pressure, temperature and various other parameters are analyzed using software. Optimization is also done for the best suited shape of nose cones for best suited hypersonic flight. After analyzing the parameters it is found that tangent ogive nose cone shape is found to be the best suited shape for this particular flow pattern. This book is useful to BE (Aeronautical Engineering) / ME (Avionics) students.