The Genius Under the Table: Growing Up Behind the Iron Curtain (Hardcover) 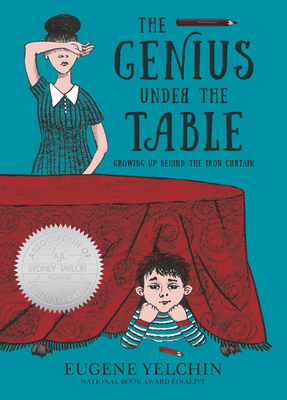 The Genius Under the Table: Growing Up Behind the Iron Curtain (Hardcover)


On Our Shelves Now at:
An Association of Jewish Libraries Sydney Taylor Honor Winner

With a masterful mix of comic timing and disarming poignancy, Newbery Honoree Eugene Yelchin offers a memoir of growing up in Cold War Russia.

Drama, family secrets, and a KGB spy in his own kitchen! How will Yevgeny ever fulfill his parents’ dream that he become a national hero when he doesn’t even have his own room? He’s not a star athlete or a legendary ballet dancer. In the tiny apartment he shares with his Baryshnikov-obsessed mother, poetry-loving father, continually outraged grandmother, and safely talented brother, all Yevgeny has is his little pencil, the underside of a massive table, and the doodles that could change everything. With equal amounts charm and solemnity, award-winning author and artist Eugene Yelchin recounts in hilarious detail his childhood in Cold War Russia as a young boy desperate to understand his place in his family.
Eugene Yelchin is the co-author and illustrator of the 2018 National Book Award Finalist The Assassination of Brangwain Spurge, co-written with M. T. Anderson. A Tomie dePaola Illustrator Award Winner, he also received a Newbery Honor for his novel Breaking Stalin’s Nose. Born in Leningrad, Russian-American Eugene Yelchin now lives in Topanga, California, with his family.
Darkly humorous. . . Yelchin’s breezy pencil illustrations brim with a charm and childlike energy few artists can capture.
—The New York Times Book Review

The self-effacing narrative seamlessly blends in Cold War history, Soviet politics, and loving family interchanges, and Yelchin's sly illustrations appear on almost every page. There's not a lot of material about this time period, and this humorous, informative, and engaging memoir will keep readers entertained.
—Booklist (starred review)

This memoir of [Yelchin's] adolescence is a forthright, darkly humorous and indelible portrait of an artist emerging. . . Yelchin, wonderfully, allows his text and pictures to interrupt each other with glee, reminding us how life begets art. It certainly does here.
—The Horn Book (starred review)

In this frank, engaging memoir, Yelchin (Spy Runner) recounts his childhood in the U.S.S.R. as his boyhood self, Yevgeny, perceives and ponders it. . . . At once comical and disquieting, the book is an illuminating introduction to a young life in the former Soviet Union.
—Publishers Weekly (starred review)

The multitalented author/illustrator here turns his lens on his own life as a child in Soviet Russia during the 1960s and ’70s. . . . with any luck Yelchin will follow this with a second autobiographical volume.
—The Bulletin of the Center for Children's Books (starred review)

Yelchin has created an unforgettable portrayal of one family’s experiences living in the Soviet Union during the Cold War in his ingenious memoir. . . . Recommended for those who love captivating memoirs mixed with humor.
—School Library Journal (starred review)

In this splendidly entertaining memoir of a bleak childhood in Cold War Russia, Yelchin turns a dark, drab world into a kaleidoscope of humorously enlightening anecdotes. . . Yelchin adorns the story with his distinctive art, perfectly complementing the text. . . Simply beautiful!

Author Eugene Yelchin gives readers an honest look at what his life was like growing up in Soviet Russia. . . . I believe this book definitely should be included in upper elementary and middle school libraries.
—School Library Connection

‘The Genius Under the Table’ is Eugene Yelchin’s idiosyncratic illustrated memoir of boyhood behind the Iron Curtain, a chronicle that manages to amuse with its quirky details and disturb with the broad picture it paints of life under communism. . . wry and humorous artwork adds to the levity.
—The Wall Street Journal

Who knew you could pull a deft memoir this funny out of Communism?
—NPR

Steeped in wry observations and black humor. . . . A beautiful, layered memoir about how people thrive when their country is doing its best to stifle their dreams.
—The Star Tribune

With the same deadpan, comic style he used to great effect in 2011 children's novel ‘Breaking Stalin's Nose,’ author-illustrator Eugene Yelchin offers a poignant memoir of growing up in the Soviet Union.
—The Buffalo News

So many of the faces in Eugene Yelchin’s illustrated memoir are doleful, but somehow his tale of curiosity and artistic passion — yes, he is the “genius” of the title — has lightness and humor despite the dark parts of his family’s story. . . . a strange, surprising and satisfying tale of growing up with not just artistic skill but also an ever-questioning sensibility that even his dour surroundings can’t stifle.
—The Virginian Pilot

Yelchin’s book, which was published earlier this year, deserves top billing among children’s historical literature—and strong consideration as a holiday gift… The Genius Under the Table is filled with both history and heart. And who knows? Perhaps the independence of thought it fosters in children is the ingredient this modern-day, politically divisive world needs to address existential threats to humanity.
—The Bulletin of the Atomic Scientists

A heartbreaking, yet amusing, exploration of what life was really like as a child, citizen and Jew in the Soviet Union. Despite the turmoil that Yelchin and his family went through, the book, which includes exaggerated caricatures of his story’s subjects, is also hopeful.
—Jewish Journal

Eugene Yelchin’s new memoir, The Genius Under the Table, is an extraordinary work of memory told with clear-sightedness and ironic good humor, both disguising a great deal of pathos. This book is a recipe for survival for us all in a world growing tougher by the day.
—David Small, Caldecott Medal winner and National Book Award Finalist for Stitches

I read Eugene Yelchin’s sad, funny memoir with tears and laughter. It is told with such exquisite humor and illustrated with such wonderful, biting drawings that, in spite of its darkness, I savored every word and every picture. A treat.
—Uri Shulevitz, winner of the Caldecott Medal and three Caldecott Honors

What was life like behind the Iron Curtain? Yelchin wittily recounts his hardscrabble upbringing in Cold War Russia.
—PEOPLE Magazine

Words and images inter­act with one anoth­er, each essen­tial to under­stand­ing Eugene’s expe­ri­ence. . . . Yelchin’s genius, which first appeared under the table, is here to enlight­en everyone.
—The Jewish Book Council

Eugene Yelchin’s illustrated memoir is shaping up to be one of the most celebrated books of the season. And with good reason – It’s funny, surprising, and heart-wrenching.
—100 Scope Notes