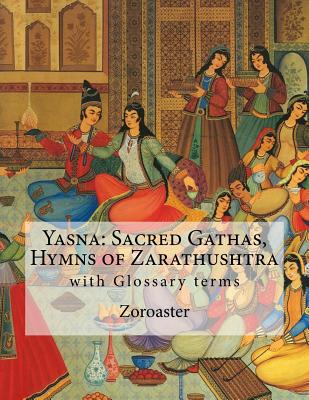 
Not On Our Shelves—Ships in 1-5 Days
(This book cannot be returned.)
Zoroastrianism, or more natively Mazdayasna, is one of the world's oldest religions, "combining a cosmogonic dualism and eschatological monotheism in a manner unique... among the major religions of the world." Ascribed to the teachings of the Iranian Prophet Zoroaster (or Zarathustra), he exalted their deity of wisdom, Ahura Mazda, (Wise Lord) as its Supreme Being. Leading characteristics, such as messianism, heaven and hell, and free will are said to have influenced other religious systems, including Second Temple Judaism, Gnosticism, Christianity, and Islam. With possible roots dating back to the second millennium BCE, Zoroastrianism enters recorded history in the 5th-century BCE, and including a Mithraic Median prototype and Zurvanist Sassanid successor it served as the state religion of the pre-Islamic Iranian empires from around 600 BCE to 650 CE. Zoroastrianism has no major theological divisions, though it is not uniform; modern-era influences having a significant impact on individual and local beliefs, practices, values and vocabulary, sometimes merging with tradition and in other cases displacing it. In Zoroastrianism, the purpose in life is to "be among those who renew the world...to make the world progress towards perfection". Its basic maxims include: Humata, Hukhta, Huvarshta, which mean: Good Thoughts, Good Words, Good Deeds. There is only one path and that is the path of Truth. Do the right thing because it is the right thing to do, and then all beneficial rewards will come to you also. The most important texts of the religion are those of the Avesta, which includes the writings of Zoroaster known as the Gathas, presented here in this book which are enigmatic poems that define the religion's precepts, and the Yasna, the scripture. The full name by which Zoroaster addressed the deity is: Ahura, The Lord Creator, and Mazda, Supremely Wise. He proclaimed that there is only one God, the singularly creative and sustaining force of the Universe. He also stated that human beings are given a right of choice, and because of cause and effect are also responsible for the consequences of their choices. Zoroaster's teachings focused on responsibility, and did not introduce a devil, per se. The contesting force to Ahura Mazda was called Angra Mainyu, or angry spirit. Post-Zoroastrian scripture introduced the concept of Ahriman, the Devil, which was effectively a personification of Angra Mainyu. Included in this interpretation of the book is a list of Glossary terms for the reader to further understand one of the oldest religions in the world.