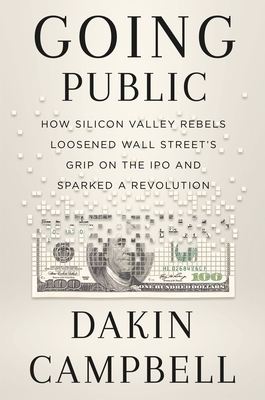 
Not On Our Shelves—Ships in 1-5 Days
A behind-the-scenes tour of the high-stakes world of IPOs and how a visionary band of startup executives, venture capitalists, and maverick bankers has launched a crusade to upend the traditional IPO as we know it.

GOING PUBLIC is a character-driven narrative centered on the last five years of unparalleled change in how technology startups sell shares to the public. Initial public offerings, or IPOs, are typically the first time retail investors can own a piece of the New Economy companies promising to rewire economic rules. Selling IPOs is also one of the most profitable businesses for Wall Street investment banks, who have spent the last 40 years protecting their profits. In an era when algorithms and software have made the financial markets more efficient, the pricing of IPOs still relies on human judgment.

In 2018, executives at music-streaming service Spotify sought to upend the status quo. Led by a trim and understated CFO, Barry McCarthy, and a shy but brilliant founder, Daniel Ek, they took a wild idea and forged something new. GOING PUBLIC explores how they got comfortable with the risk, and how they lobbied securities watchdogs and exchange staff to rewrite the regulations. Readers will meet executives at disruptive companies like Airbnb, DoorDash, venture capitalists, and even some bankers who seized on Spotify’s labor and used it to knock Wall Street bankers off the piles of fees they’d been stacking for so long.

GOING PUBLIC weaves in earlier attempts to rethink the IPO process, introducing readers to one of Silicon Valley’s earliest bankers, Bill Hambrecht, whose invention for selling shares online was embraced by Google founders Larry Page and Sergey Brin when they auctioned their shares in 2004. And it examines the recent boom in blank-check companies, those Wall Street insider deals that have suddenly become the hottest way to enter the public markets. GOING PUBLIC tells stories from inside the room, and more.
Dakin Campbell is the Chief Finance Correspondent at Business Insider. He is the publication’s senior reporter covering Wall Street, after a decade at Bloomberg writing for its wire service, Businessweek, and Markets magazine.
"Dakin Campbell has delivered a meticulously reported history of a stock market revolution. He deftly traces the triumph of giants like Apple selling shares to the public, how innovators threatened Wall Street and how the investment banks fought back. He makes you feel how enticing the hunt for unicorns has been for each new class of investor, while tracing the scams that arose to relieve these naïfs of their money."—Jesse Eisinger, Pulitzer Prize winning reporter and author of The Chickenshit Club

"For thousands of years, dating back at least to the time of the Romans, investors have acquired and swapped stakes in private entities seeking new sources of funding. In GOING PUBLIC, Dakin Campbell skillfully illuminates this often arcane process, its history, its importance, its perils, and most crucially its dramatic transformation in the pressurized board rooms and c-suites of modern Silicon Valley. The result is a rollicking, behind-the-scenes tale, populated by big personalities, pioneering technologists, and storied tech companies as they make the momentous, heady, hazardous leap of an initial public offering. It’s a valuable, gripping read that will delight anyone interested in the thermodynamics of business innovation and financial markets. GOING PUBLIC will change the way you understand who profits from the technological revolutions coursing through the American economy, how they profit, and where it is all heading." —Felix Gillette, writer for Bloomberg Businessweek and author of It's Not TV: The Spectacular Rise, Revolution, and Future of HBO

"In GOING PUBLIC, Dakin Campbell expertly elucidates the wisdom, as well as the flaws, in the way the big Wall Street investment banks raise equity capital for companies all across the world; Campbell then traces how innovation is starting to break the hammerlock hold that Wall Street has had on that process for decades, giving some hope to both issuers and retail investors that the rigged game finally may be changing for the better."—William D. Cohan, a Vanity Fair writer and author of Power Failure: The Rise and Fall of an American Icon

"With amazingly detailed reportage, GOING PUBLIC takes you inside the rooms where some of the biggest tech IPOs -- from Google to Airbnb -- were forged. This deeply-researched book is essential reading on the nexus between Wall Street and Silicon Valley that determines who gets rich and who gets ripped off when companies list their shares."—Jack Farchy, co-author of The World for Sale

"Dakin Campbell has written the definitive account of that most crucial and nailbiting of days in a company's history: their IPO. Expertly and engagingly written, GOING PUBLIC reveals what goes on behind the scenes when the world's best-known companies comes to market, and how that is evolving."—Liam Vaughan, author of Flash Crash: A Trading Savant, A Global Manhunt and the Most Mysterious Market Crash in History

“A vivid portrait of how companies go public. The last few years have seen a reimagining of the IPO, one of the most important events in finance, and Dakin Campbell brilliantly tells the story of the people and ideas behind the modern IPO.”—Matt Levine, Bloomberg Opinion columnist and writer of daily financial newsletter Money Stuff

"Silicon Valley's revolutionary sway extends well beyond technology. Back when they were scrappy start-ups, tech giants like Netflix, Google and Spotify joined forces with disruption-minded financial advisors and investors to democratize the IPO process. GOING PUBLIC is an important tale, crisply and brilliantly told, about how these reformers chipped away at Wall Street's hegemony over IPOs and upended what had been a rigged game. Campbell brings his story to vibrant life with sharply etched portraits of leading players and atmospheric accounts of key events. GOING PUBLIC is essential reading for anyone interested in modern Wall Street and the money side of high technology."—David Carey, coauthor of King of Capital: The Remarkable Rise, Fall, and Rise Again of Steve Schwarzman and Blackstone

GOING PUBLIC “walks readers through the IPO process in vivid detail. It describes the heated meetings and lavish lunches at which the financial futures of the world's biggest tech firms are decided… for anyone who wants to understand this crucial moment in capitalism, GOING PUBLIC offers a glimpse behind the curtain.”—The Economist