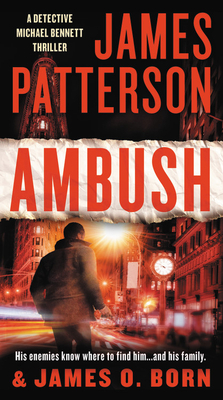 This is book number 11 in the A Michael Bennett Thriller series.

Only Detective Michael Bennett stands in the way of two lethal cartels fighting for New York City's multi-million-dollar opioid trade. And they know where he and his family live.
An anonymous tip about a crime in Upper Manhattan proves to be a setup. An officer is taken down -- and, despite the attackers' efforts, it's not Michael Bennett.
New York's top cop is not the only one at risk. One of Bennett's children sustains a mysterious injury. And a series of murders follows, each with a distinct signature, alerting Bennett to the presence of a professional killer with a flair for disguise.
Bennett taps his best investigators and sources, and they fan out across the five boroughs. But the leads they're chasing turn out to be phantoms. The assassin takes advantage of the chaos, enticing an officer into compromising Bennett, then luring another member of Bennett's family into even graver danger.
Michael Bennett can't tell what's driving the assassin. But he can tell it's personal, and that it's part of something huge. Through twist after twist, he fights to understand exactly how he fits into the killer's plan, before he becomes the ultimate victim.
James Patterson is the world's bestselling author and most trusted storyteller. He has created many enduring fictional characters and series, including Alex Cross, the Women's Murder Club, Michael Bennett, Maximum Ride, Middle School, and I Funny. Among his notable literary collaborations are The President Is Missing, with President Bill Clinton, and the Max Einstein series, produced in partnership with the Albert Einstein Estate. Patterson's writing career is characterized by a single mission: to prove that there is no such thing as a person who "doesn't like to read," only people who haven't found the right book. He's given over three million books to schoolkids and the military, donated more than seventy million dollars to support education, and endowed over five thousand college scholarships for teachers. The National Book Foundation recently presented Patterson with the Literarian Award for Outstanding Service to the American Literary Community, and he is also the recipient of an Edgar Award and six Emmy Awards. He lives in Florida with his family.