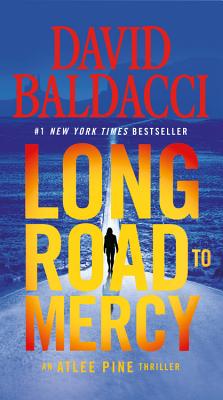 This is book number 1 in the An Atlee Pine Thriller series.

Introducing a remarkable new character from #1 New York Times bestselling writer David Baldacci: Atlee Pine, an FBI agent with special skills assigned to the remote wilds of the southwestern United States who must confront a new threat . . . and an old nightmare.

Eeny, meeny, miny, moe. Catch a tiger by its toe.

It's seared into Atlee Pine's memory: the kidnapper's chilling rhyme as he chose between six-year-old Atlee and her twin sister, Mercy. Mercy was taken. Atlee was spared.

Three decades after that terrifying night, Atlee Pine works for the FBI. She's the lone agent assigned to the Shattered Rock, Arizona resident agency, which is responsible for protecting the Grand Canyon.

So when one of the Grand Canyon's mules is found stabbed to death at the bottom of the canyon-and its rider missing-Pine is called in to investigate. It soon seems clear the lost tourist had something more clandestine than sightseeing in mind. But just as Pine begins to put together clues pointing to a terrifying plot, she's abruptly called off the case.

If she disobeys direct orders by continuing to search for the missing man, it will mean the end of her career. But unless Pine keeps working the case and discovers the truth, it could spell the very end of democracy in America as we know it...
"Love it!" --Lisa Gardner"Atlee Pine is unforgettable." --James Patterson
"David Baldacci's best yet." --Lisa Scottoline
"Heart-poundingly suspenseful." --Scott Turow
"A stunning debut." --Douglas Preston
"A perfect blend of action, secrets, and conspiracies." --Steve Berry
"Baldacci is at the top of his game." --Kathy Reichs

DAVID BALDACCI is a global #1 bestselling author, and one of the world's favorite storytellers. His books are published in over forty-five languages and in more than eighty countries, with 150 million copies sold worldwide. His works have been adapted for both feature film and television. David Baldacci is also the cofounder, along with his wife, of the Wish You Well Foundation, a nonprofit organization dedicated to supporting literacy efforts across America. Still a resident of his native Virginia, he invites you to visit him at DavidBaldacci.com and his foundation at WishYouWellFoundation.org.