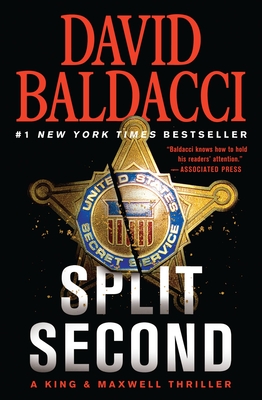 This is book number 1 in the King & Maxwell Series series.

Two Secret Service agents sworn to guard their protectees lost them in a single moment . . . and in this #1 New York Times bestseller, they're about to learn that the violence has just begun.

Michelle Maxwell has just wrecked her promising career at the Secret Service. Against her instincts, she let a presidential candidate out of her sight for the briefest moment and the man whose safety was her responsibility vanished into thin air.

​Sean King knows how the younger agent feels. Eight years earlier, the hard-charging Secret Service agent allowed his attention to be diverted for a split second. And the candidate he was protecting was gunned down before his eyes. Now Michelle and Sean are about to see their destinies converge.

Drawn into a maze of lies, secrets, and deadly coincidences, the two discredited agents uncover a shocking truth: that the separate acts of violence that shattered their lives were really a long time in the making—and are a long way from over.
David Baldacci is a global #1 bestselling author, and one of the world's favorite storytellers. His books are published in over forty-five languages and in more than eighty countries, with 150 million copies sold worldwide. His works have been adapted for both feature film and television. David Baldacci is also the cofounder, along with his wife, of the Wish You Well Foundation, a nonprofit organization dedicated to supporting literacy efforts across America. Still a resident of his native Virginia, he invites you to visit him at DavidBaldacci.com and his foundation at WishYouWellFoundation.org.
"David Baldacci is one of the all-time best thriller authors."—Lisa Gardner, #1 New York Times bestselling author

"The action is explosive. Readers will barely have time to catch their breath."—People

"David Baldacci has always been a top-notch thriller writer."—BookReporter.com