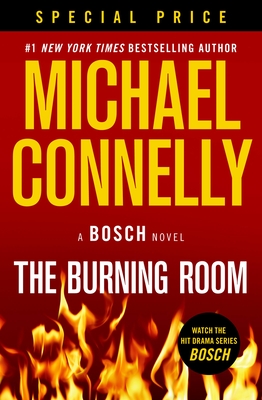 This is book number 17 in the A Harry Bosch Novel series.

In this #1 New York Times bestseller, Detective Harry Bosch and his rookie partner investigate a cold case that gets very hot . . . very fast.
In the LAPD's Open-Unsolved Unit, not many murder victims die almost a decade after the crime. So when a man succumbs to complications from being shot by a stray bullet nine years earlier, Bosch catches a case in which the body is still fresh, but all other evidence is virtually nonexistent.

Now Bosch and rookie Detective Lucia Soto are tasked with solving what turns out to be a highly charged, politically sensitive case. Beginning with the bullet that's been lodged for years in the victim's spine, they must pull new leads from years-old information, which soon reveal that this shooting may have been anything but random.

In this gripping thriller, Michael Connelly shows once again why Harry Bosch is "one of the greats of crime fiction" (New York Daily News).
Michael Connelly is the author of twenty-eight previous novels, including #1 New York Times bestsellers The Crossing and The Burning Room.  His books, which include the Harry Bosch series and Lincoln Lawyer series, have sold more than sixty million copies worldwide.  Connelly is a former newspaper reporter who has won numerous awards for his journalism and his novels and is the executive producer of Bosch, starring Titus Welliver.  He spends his time in California and Florida.
"This is the finest crime series written by an American....There are few fictional characters we know so well; Harry is an old friend now."—Patrick Anderson, Washington Post

"Bosch has become one of the most popular and enduring figures in American crime fiction."—Kevin Nance, Chicago Tribune

"The Black Echo introduced Connelly as the heir apparent to Raymond Chandler and also helped usher in a new approach to the police procedural. Now, twenty years later, Connelly is still writing about Harry Bosch, continuing to discover new layers to this now iconic character with increasingly complex and believable plots....Connelly makes him a fresh and original character each outing."—Oline H. Cogdill, Miami Herald

"Connelly proves again that neither he nor Bosch has lost his touch."—Christian DuChateau, CNN

"Harry Bosch is as formidable as he ever was."—Sherryl Connelly, New York Daily News