Death of a Traitor (A Hamish Macbeth Mystery) (Hardcover) 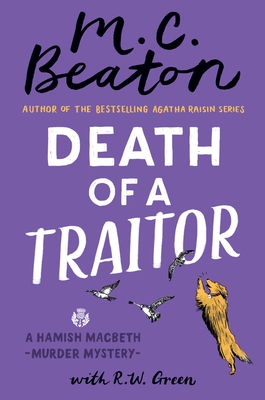 Death of a Traitor (A Hamish Macbeth Mystery) (Hardcover)

This is book number 35 in the A Hamish Macbeth Mystery series.

Sergeant Hamish Macbeth—Scotland's most quick witted but unambitious policeman—is back to investigate the disappearance of a local woman who is more than she seems, in this new mystery in M.C. Beaton's beloved, New York Times bestselling series.

Kate Hibbert is all too eager to lend a hand to her neighbors. Although she has been a resident of the sleepy village of Lochdubh for only a year, in that time Kate has alienated one too many of its residents with her interfering—and not entirely well-intentioned—ways. When Kate’s neighbor sees her lugging a heavy suitcase to the bus stop, he hopes that the prying woman is leaving for good. But two weeks later, Kate’s cousin arrives in town with the news that Kate has gone missing—and she demands that the local police step in.

Sergeant Hamish Macbeth is called in to investigate the disappearance, and soon he is befuddled by a storm of lies, intrigue, and scandal . . . and the sneaking suspicion that Kate was someone much more sinister than she claimed. Torn between loyalty to Lochdubh and his job, Hamish begins threading his way through a maze of deceit, quickly finding himself on the trail of a ruthless, treacherous murderer. If he catches the killer, peace can return to the village. If he fails, he will lose everything: his job, his home, and the life he so loves in Lochdubh.
M. C. Beaton, hailed as the "Queen of Crime" by the Globe and Mail, was the author of the New York Times and USA Today bestselling Agatha Raisin novels—the basis for the hit series on Acorn TV and public television—as well as the Hamish Macbeth series. Born in Scotland, Beaton started her career writing historical romances under several pseudonyms as well as her maiden name, Marion Chesney. Her books have sold more than twenty-two million copies worldwide.

A long-time friend of M. C. Beaton, R. W. Green has written numerous works of fiction and non-fiction. He lives in Surrey with his family and a black Labrador called Flynn.

"Another pitch-perfect entry in the long-running Hamish Macbeth series . . . capturing
Beaton’s deft plotting, shrewd characterizations, and loving depictions of the Scottish Highlands. . . The plot builds and twists nicely . . .  Raise a glass of Hamish’s favored Famous Grouse to this new addition in a worthy series."—Booklist

"Longing for escape? Tired of waiting for Brigadoon to materialize? Time for a trip to Lochdubh, the scenic, if somnolent, village in the Scottish Highlands where M. C. Beaton sets her beguiling whodunits featuring Constable Hamish Macbeth."—New York Times Book Review

"Beaton, the grand dame of the cozy mystery genre, passed away in late 2019. Beaton chose her friend and fellow writer Green to continue her Hamish Macbeth and Agatha Raisin mystery series . . . and he delivers the charge most admirably. [Death of a Green-Eyed Monster] maintains Beaton's distinctive voice and includes the usual village eccentrics, loads of Scottish lore, and the light humor that Beaton fans have loved through the years. Most important, the book ends with a teaser that seems to promise more and even wilder adventures for Hamish."—Library Journal (Starred Review)

"Pays fine tribute to Beaton . . . Beaton and Green do a superb job keeping the red herrings coming and the plot twists jumping out at you until the finale. You’ll just have to strap on your favorite kilt and visit scenic Lochdubh to find out exactly what is going on."—Bookreporter on Death of a Green-Eyed Monster

"Some terrific comic moments (reminiscent of All Creatures Great and Small) . . . Long live Macbeth, Sergeant of Scotland!"—Booklist on Death of a Green-Eyed Monster (Starred Review)

"This is R. W. Green’s first outings as the successor to Marion Beaton’s Hamish Macbeth series, and he captures [Macbeth's] charm . . . As in the previous Macbeth books, [Death of a Green-Eyed Monster] deals with human failings. Thanks to the gentle touch of R. W. Green, readers will look forward to spending more time in the future with Hamish as he protects the land and people he loves dearly."—New York Journal of Books