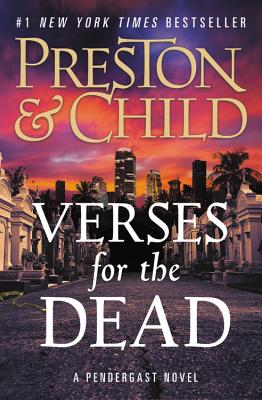 This is book number 18 in the Agent Pendergast Series series.

In this #1 New York Times bestseller, FBI Agent Pendergast reluctantly teams up with a new partner to investigate a rash of Miami Beach murders . . . only to uncover a deadly conspiracy that spans decades.
After an overhaul of leadership at the FBI's New York field office, A. X. L. Pendergast is abruptly forced to accept an unthinkable condition of continued employment: the famously rogue agent must now work with a partner.
Pendergast and his new colleague, junior agent Coldmoon, are assigned to investigate a rash of killings in Miami Beach, where a bloodthirsty psychopath is cutting out the hearts of his victims and leaving them with cryptic handwritten letters at local gravestones. The graves are unconnected save in one bizarre way: all belong to women who committed suicide.
But the seeming lack of connection between the old suicides and the new murders is soon the least of Pendergast's worries. Because as he digs deeper, he realizes the brutal new crimes may be just the tip of the iceberg: a conspiracy of death that reaches back decades.
The thrillers of Douglas Preston and Lincoln Child "stand head and shoulders above their rivals" (Publishers Weekly). Preston and Child's Relic and The Cabinet of Curiosities were chosen by readers in a National Public Radio poll as being among the one hundred greatest thrillers ever written, and Relic was made into a number-one box office hit movie. They are coauthors of the famed Pendergast series and their recent novels include Fever Dream, Cold Vengeance, Two Graves, and Gideon's Corpse. In addition to his novels, Preston writes about archaeology for the New Yorker and Smithsonian magazines. Lincoln Child is a former book editor who has published five novels of his own, including the huge bestseller Deep Storm.
Readers can sign up for The Pendergast File, a monthly "strangely entertaining note" from the authors, at their website, www.PrestonChild.com. The authors welcome visitors to their alarmingly active Facebook page, where they post regularly.
"Multifaceted and complex. Legendary. Working together, Preston and Child are masters at crafting a story that goes beyond a simple mystery or thriller ... Readers unfamiliar with Pendergast will find this novel a fantastic launch point. He's a modern-day Sherlock Holmes, and the story reads like classic literature."—Associated Press

"Doug Preston and Lincoln Child's master detective A.X.L. Pendergast is every bit the modern equivalent of Sherlock Holmes and Hercule Poirot. And his investigative skills have never been sharper than in the altogether brilliant VERSES FOR THE DEAD.... A throwback to classic crime fiction while maintaining a sharp, postmodern edge."—Providence Journal

"The 18th installment in the Pendergast series by Preston and Child gives the hero a partner in the hunt for a strange killer... Pendergast is highly successful in closing cases on his own but 'was about as rogue as they came,' and suspects tend not to survive his investigations. Agent Coldmoon's secret assignment is to keep a close eye on his partner, 'a bomb waiting to go off' ... [VERSES FOR THE DEAD has] a nerve-wracking finish. Readers will love the quirky characters in this clever yarn. Pendergast and Coldmoon make an excellent pair. "—Kirkus (starred review)

"This is mystery thriller writing of the highest order."—Providence Journal, on CITY OF ENDLESS NIGHT