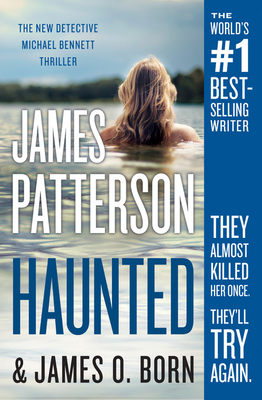 This is book number 10 in the A Michael Bennett Thriller series.

Detective Michael Bennett and his family are ready to escape New York for a vacation in Maine-but a shocking scene deep in the woods reveals a dark world of drugs and murder.
Haunted by guilt and shame, Michael Bennett is living with a father's worst nightmare. Reeling from a crisis that would destroy lesser families, the Bennetts escape New York for a much-needed vacation. But it turns out the brochures don't tell the full story; the seemingly perfect community has a deadly vice.
When local cops uncover a grisly crime scene buried deep in the woods, they consult the vacationing Bennett, who jumps at the chance to atone for his own sins. But far from the city streets he knows so well, no one will talk to the big-city detective, and the bodies keep piling up.
A young and forgotten girl is the closest thing Bennett has to a partner in his frantic hunt for the ghostlike perpetrator behind the violence. Will Bennett and his unlikely ally unmask the culprit before anyone else winds up haunted?
James Patterson holds the Guinness World Record for the most #1 New York Times bestsellers. His books have sold more than 350 million copies worldwide. He has donated more than one million books to students and soldiers and has over four hundred Teacher Education Scholarships at twenty-four college and universities. He has also donated millions to independent bookstores and school libraries.

"Behind all the noise and the numbers, we shouldn't forget that no one gets this big without amazing natural storytelling talent--which is what James Patterson has, in spades."
—Lee Child

"It's no mystery why James Patterson is the world's most popular thriller writer: his uncanny skill in creating living, breathing characters we truly feel for and seamless, lightning-fast plots. I do this for a living, and he still manages to keep me guessing from the first to last page. Simply put: Nobody does it better."--
—Jeffery Deaver

"Patterson's books might as well come with movie tickets as a bonus feature."
—New York Times