A Minute to Midnight (An Atlee Pine Thriller #2) (Hardcover) 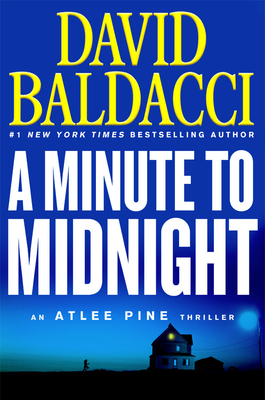 A Minute to Midnight (An Atlee Pine Thriller #2) (Hardcover)

This is book number 2 in the An Atlee Pine Thriller series.

In this #1 New York Times bestselling thriller, FBI Agent Atlee Pine returns to her Georgia hometown to investigate her twin sister's abduction, only to encounter a serial killer.
FBI Agent Atlee Pine's life was never the same after her twin sister Mercy was kidnapped -- and likely killed -- thirty years ago. After a lifetime of torturous uncertainty, Atlee's unresolved anger finally gets the better of her on the job, and she finds she has to deal with the demons of her past if she wants to remain with the FBI.
Atlee and her assistant Carol Blum head back to Atlee's rural hometown in Georgia to see what they can uncover about the traumatic night Mercy was taken and Pine was almost killed. But soon after Atlee begins her investigation, a local woman is found ritualistically murdered, her face covered with a wedding veil -- and the first killing is quickly followed by a second bizarre murder.
Atlee is determined to continue her search for answers, but now she must also set her sights on finding a potential serial killer before another victim is claimed. But in a small town full of secrets -- some of which could answer the questions that have plagued Atlee her entire life -- and digging deeper into the past could be more dangerous than she realizes . . .
David Baldacci is a global #1 bestselling author, and one of the world's favorite storytellers. His books are published in over forty-five languages and in more than eighty countries, with 150 million copies sold worldwide. His works have been adapted for both feature film and television. David Baldacci is also the cofounder, along with his wife, of the Wish You Well Foundation, a nonprofit organization dedicated to supporting literacy efforts across America. Still a resident of his native Virginia, he invites you to visit him at DavidBaldacci.com and his foundation at WishYouWellFoundation.org.
"Secrets and twists pop up seemingly on every page . . . an angst-riddled tale with a Southern Gothic tone. This is brilliant storytelling that will leave you reading long after the clock strikes 12."—Providence Journal

"A murder mystery that spooks and horrifies."
—Associated Press

"Baldacci has produced another remarkable novel with plot twists galore that let the pages practically turn themselves. His writing style allows readers to immediately enter the action and then forces them to strap in for another wild ride. He saves the biggest surprise for last in a moment that will provide an unexpected cliffhanger, which will have his audience eagerly awaiting the next entry."—BookReporter.com

"Baldacci does a fantastic job plotting things out and revealing just enough . . . to keep readers engaged and on the edge of their seats . . . A final surprise [will] leave fans begging for more. . . Few writers can hook readers faster and harder than David Baldacci."—The Real Book Spy

"Baldacci shows off his mastery of the twist-and-turn-thriller, keeping us on edge throughout, right up to a surprise finale."—Florida Times-Union

"Mysterious . . . a good read right to the end."—Winnipeg Free Press