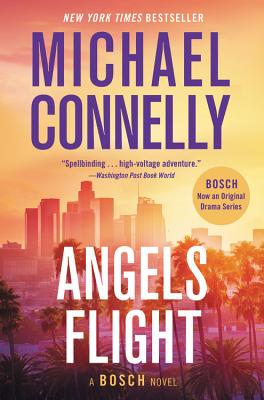 This is book number 6 in the A Harry Bosch Novel series.

In this "superbly paced" New York Times bestseller (Esquire), LAPD detective Harry Bosch is trying to solve a high-profile lawyer's murder. But first he must face the public's suspicion . . . and his darkest fears.
An activist attorney is killed in a cute little L.A. trolley called Angels Flight, far from Harry Bosch's Hollywood turf. But the case is so explosive -- and the dead man's enemies inside the L.A.P.D. are so numerous -- that it falls to Harry to solve it. Now the streets are superheating. Harry's year-old Vegas marriage is unraveling. And the hunt for a killer is leading Harry to another high-profile L.A. murder case, one where every cop had a motive. The question is, did any have the guts?
Michael Connelly is the author of thirty novels, including the #1 New York Times bestsellers The Late Show and The Wrong Side of Goodbye. His books, which include the Harry Bosch and Lincoln Lawyer series, have sold more than sixty million copies worldwide. Connelly is a former newspaper reporter who has won numerous awards for his journalism and his novels and is the executive producer of Bosch, starring Titus Welliver. He spends his time in California and Florida.
"[Michael Connelly] continues to amaze with his consistent skill and sizzle."—Cleveland Plain Dealer

"A Connelly novel is a thing of cool beauty."—Chicago Tribune

"Michael Connelly is the master of the universe in which he lives, and that is the sphere of crime thrillers. This man is so good at what he does."