Lives that Speak and Deeds that Beckon: A History of the Unitarian Society of Wellesley Hills (Paperback) 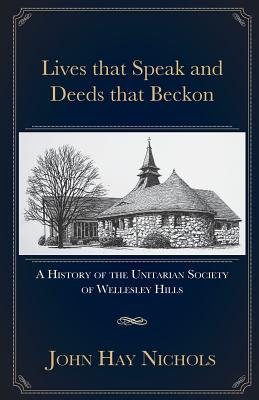 Lives that Speak and Deeds that Beckon: A History of the Unitarian Society of Wellesley Hills (Paperback)

It all began in the 1860s when several liberal Unitarian Christian families moved from Boston to the suburb of Grantville, as Wellesley Hills was called then, when the railroad arrived. With no Unitarian church in town, they found a minister they liked in Needham, managed to lure him away, and rented Maugus Hall, a town community center, for services.

Out of humble beginnings in 1871 grew a congregation that not only became prominent in Wellesley and the denomination but also made a significant, lasting impact on the world. Wellesley Unitarian ministers:

Share the well-researched journey of the Unitarian Society of Wellesley Hills from the perspective of one of its distinguished, long-time ministers in the context of Wellesley history. Experience the hopes, dreams, doubts, and courage of a congregation as it grows and evolves with the times.

The Reverend Dr. John Hay Nichols is minister emeritus of the Unitarian Universalist Society of Wellesley Hills, Massachusetts, where he served as senior minister for twenty-three years. Previously, he was minister in Hinsdale, Illinois, and Canton, Massachusetts. Before retiring, John served as interim minister for ten congregations in Massachusetts, Rhode Island, and New York. Nichols is the author of A Wind Swept Over the Waters: Reflections on Sixty Favorite Bible Passages, A Biblical Humanist Companion, Liberal Religion's Response to Loss, and numerous other publications. He received his Doctor of Ministry degree from Meadville Theological School in Chicago and has taught Unitarian Universalist Polity at Andover Newton Theological School and New York Theological Seminary. Over the years John has often spent time digging through historical documents and piecing together the stories they tell. He and his wife Nancy live in Wayland, Massachusetts, and enjoy spending time with their two children and five grandchildren.