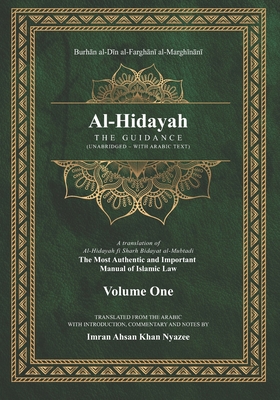 
Not On Our Shelves—Ships in 1-5 Days
(This book cannot be returned.)
This book is WITH the ARABIC TEXT.The Hidayah has dominated the field of Islamic jurisprudence since the day it was written over 800 years ago. It has been the primary text used by Muslim jurists to issue authentic and reliable rulings on Islamic law according to the school of Imam Abu Hanifah (d.150AH/767CE). The Hidayah commands such an authoritative position amongst the doctors of law that the knowledge of a scholar who has not read it is not considered reliable. Around 70 huge commentaries, some spread over more than a dozen volumes, have been written on it. The number of explanatory glosses is in the thousands. Comprehensive in content and conveniently organized, with the publication of this book all previous works that discussed Islamic jurisprudence according to Hanafi law became outmoded and soon fell into disuse. If revealed books are not taken into account, never has a book received so much attention as the Hidayah. This landmark publication of The Hidayah not only has been translated in its entirety for the first time but has been done so from Arabic, the language in which it was written.