The Jakarta Method: Washington's Anticommunist Crusade and the Mass Murder Program that Shaped Our World (Paperback) 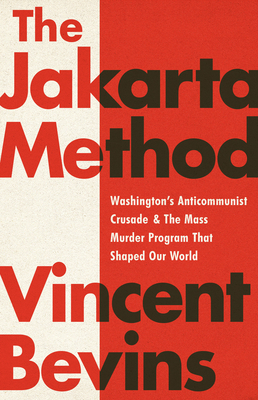 The Jakarta Method: Washington's Anticommunist Crusade and the Mass Murder Program that Shaped Our World (Paperback)


On Our Shelves Now at:
NAMED ONE OF THE BEST BOOKS OF 2020 BY NPR, THE FINANCIAL TIMES, AND GQ

The hidden story of the wanton slaughter -- in Indonesia, Latin America, and around the world -- backed by the United States.  In 1965, the U.S. government helped the Indonesian military kill approximately one million innocent civilians. This was one of the most important turning points of the twentieth century, eliminating the largest communist party outside China and the Soviet Union and inspiring copycat terror programs in faraway countries like Brazil and Chile. But these events remain widely overlooked, precisely because the CIA's secret interventions were so successful.

In this bold and comprehensive new history, Vincent Bevins builds on his incisive reporting for the Washington Post, using recently declassified documents, archival research and eye-witness testimony collected across twelve countries to reveal a shocking legacy that spans the globe. For decades, it's been believed that parts of the developing world passed peacefully into the U.S.-led capitalist system. The Jakarta Method demonstrates that the brutal extermination of unarmed leftists was a fundamental part of Washington's final triumph in the Cold War.

Vincent Bevins is an award-winning journalist and correspondent. He covered Southeast Asia for the Washington Post, reporting from across the entire region and paying special attention to the legacy of the 1965 massacre in Indonesia. He previously served as the Brazil correspondent for the Los Angeles Times, also covering nearby parts of South America, and before that he worked for the Financial Times in London.
Among the other publications he has written for are the New York Times, The Atlantic, The Economist, the Guardian, Foreign Policy, the New York Review of Books, Folha de S.Paulo, The New Republic, The New Inquiry, The Awl, The Baffler, and New York magazine. Vincent was born and raised in California and spent the last few years living in Jakarta.
"Trenchant....powerful....[Bevins] translates the findings of complex scholarly accounts into smooth and readable, if often heartbreaking, prose."
—Boston Review

"Excellent...anchors itself in a history most Americans never learned or would rather forget."
—Ishaan Tharoor, Washington Post

"Bevins is not the first to note that the Cold War frequently burned hot in the Third World, but he excels at showing the human costs of that epic ideological struggle."
—The New Republic

"Riveting....As a polemic, The Jakarta Method is never anything less than conscientious and persuasive, but Bevins's book truly takes flight as a work of narrative journalism, tracing the history of America's violent meddling in Southeast Asia and Latin America through the stories of those it brutalized."
—Jacobin

"One of the best, most informative and most illuminating histories yet of [the CIA] and the way it has shaped the actual, rather than the propagandistic, U.S. role in the world."
—Glenn Greenwald, The Intercept

"Essential and devastating."—Joshua Oppenheimer, director of The Act of Killing and The Look of Silence

"This, for my money, may be the must-read book about the Cold War. There have been quite a few, but this one is current, it's sweeping, and it's an absolute must-read, if you're only going to read one book to think about what that -maybe the most eventful period in human history - was all about....You cannot dismiss this book."
—Robert Scheer, KCRW

"This is an indispensable book for all those interested in the Third World during the era of the Cold War, and in the links between various operations of 'the Anti-Communist International', a subject whose importance will I think only increase. It might in effect emerge that the decisive global changes were not the ones that we currently see as such (the fall of the Berlin Wall), but rather what happened in countries like China, India, Vietnam, Indonesia, Brazil."
—Branko Milanovic, Brave New Europe

"An exceptionally well-written narrative.... In a fascinating and disturbing journey around the world, Bevins documents the effects of Washington's virulent anticommunist crusade across several continents."
—Tribune (UK)

"Through this transnational perspective, Bevins finds connections between unexpected locations.... [He] takes a broader approach, situating the violence within the global context of the Cold War, but the story he tells is still grounded in deep on-the-ground investigation and extraordinary personal narratives."
—North American Congress on Latin America

"Bevins wrote The Jakarta Method to show how this recent but largely ignored part of our history very much informs the way we live today. He concludes with current information about his sources, some still fighting to simply have the truth of what happened in their countries acknowledged, others expatriated to places that will never completely feel like home. It can be inspiring to hear from people willing to excavate mass graves and bury victims with dignity, but to this day that truth is struggling to be heard."
—Progressive Populist

"A shocking portrait that few readers will forget....[Bevins's] research is solid and his conclusions convincing. A well-delineated excavation of yet another dark corner of American history."—Kirkus Reviews

"Bevins has created a powerful record of the often-muddled events in Indonesia....The Jakarta Method offers an easily digestible chronology of this bloody period of Indonesian and world history."
—South China Morning Post

"In The Jakarta Method, Vincent Bevins argues persuasively that during the Cold War, the U.S. approved of mass murder campaigns to roll back communism in the Third World. This is a provocative, necessary book, an essential guide to anyone seeking a deeper understanding of our imperfect world. Highly recommended."—Jon Lee Anderson, New Yorker staff writer, author of Che Guevara and Inside the League

"Truly captivating.... Vincent Bevins offers us a compelling historical narrative, which he combines with thorough analysis and deeply personal reflections. He merges the big story of the Cold War with the stories of real individuals whose lives were profoundly affected. He masterfully connects the 1964 Brazil coup with the mass violence that took place in Indonesia in 1965, before connecting that slaughter with a series of mass murder programs in Latin America and around the world. In doing so, he offers new knowledge and insights not only into the brutal anticommunist purge in Indonesia, but into the ways that US foreign policy reshaped the world following the Second World War. Bevins is a brilliant and compassionate writer, and The Jakarta Method is eye-opening. I really hope the world pays attention to this book."
—Baskara T. Wardaya, Sanata Dharma University Indonesia, author of 1965 and Truth Will Out

"This fascinating book is a meticulous and shocking analysis of a little-known and horrifically bloody battle of the Cold War, but it is also something more. It places the Indonesia massacre of 1965 in its global context, showing how the United States both supported it and used it as a model for repression in other countries."—Stephen Kinzer, author of Overthrow, All the Shah's Men and Poisoner in Chief

"The Jakarta Method is a gripping, thoroughly original exploration into the global covert Cold War, the passions it provoked, and the corpses it left in its wake. A full tally of the body count of the transnational counterinsurgency Washington has been waging since the early 1960s is impossible. But Bevins' excellent book offers a different kind of reckoning, of moral costs and ongoing political consequences. 'Jakarta is coming' was spray-painted on the walls of Santiago Chile in 1972, just before that country's CIA-backed coup, a way for that nation's rich to let the poor know the fate that would befall them were they to continue to fight for a more just society. 'Jakarta' did come, leaving hundreds of thousands of dead throughout Latin America. And, in a way, it never left."—Greg Grandin, Yale University, author of Fordlandia and The End of the Myth

"Tragically, that which everyone believed we had left in the past has returned to spread throughout Latin America once more. The Jakarta Method allows us to understand the moment that Brazil is now living through, and its connection to a much larger, global scheme."—Paulo Coelho, author of The Alchemist and The Pilgrimage

"Bevins gives a concise account of how US-supported carnage in Indonesia inspired other countries to unleash their own murderous suppression of left-wing movements. By focusing on Indonesia and nations not aligned with either the United States or the Soviet Union, he goes beyond the typical Cold War history of arms races and intrigue....As Bevins effectively describes, we are still living in the world created by these anti-communist purges....[His] account raises necessary questions. Did the anti-communist mania of the 20th century make the world any safer? And if so, for whom?"—Foreign Policy

"Bevins is well-positioned to trace the lineage of suppression across the world aided and abetted by the U.S., which provided material support and intelligence, including lists of communists and alleged communists, to client governments....Interwoven among the politics in the books are testimonies from former communists Bevins interviewed in several countries, which he relays with novelistic brio."—The Irish Times

"Exceptional...If Indonesia is counted as a 'win' for the pro-regime change crowd, the idea of promoting regime change is absolutely bankrupt and should never be employed again."—The American Conservative

"Gripping...[Bevins]'s analysis of these events is lucid and judicious, and his narrative is driven by effective use of interview material."
—Asian Affairs

"The Jakarta Method is a must-read to better understand how the U.S. intelligence apparatus became what it is today, and how it's ravaged so many other countries along the way."
—GQ

"Bevins is less interested in long descriptions of torture and death and more in understanding the geopolitics that lie behind them. The great originality and insight of the book is its emphasis on the international scale...The Jakarta Method is a deft and necessary reckoning."—Baffler Magazine

"The Jakarta Method dismantles and re-positions the American mythos, similar to two recent Pulitzer Prize winners: Nikole Hannah-Jones's The 1619 Project and Greg Grandin's The End of the Myth.... The Jakarta Method is a devastating critique of US hypocrisy during the Cold War, and a mournful hypothetical of what the world might have looked like if Third World movements had succeeded."
—Los Angeles Review of Books

"[The Jakarta Method] sheds a welcome light on the crimes that took place in Indonesia, a history largely forgotten in the West...but it also asks the fundamental question of why America aided such atrocities... Bevins persuasively argues for his country's blanket anticommunism as a kind of zealotry, an irrational pull with origins in the foundation of the United States."
—Times Literary Supplement

"Bevins has deftly chronicled the genocide of Indonesian communists in 1965.... a brilliant history of the Cold War told through global anti-communist violence."
—New Statesman