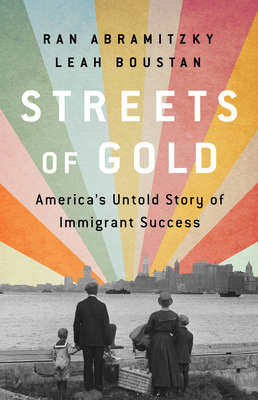 The facts, not the fiction, of America’s immigration experience

Immigration is one of the most fraught, and possibly most misunderstood, topics in American social discourse—yet, in most cases, the things we believe about immigration are based largely on myth, not facts. Using the tools of modern data analysis and ten years of pioneering research, new evidence is provided about the past and present of the American Dream, debunking myths fostered by political opportunism and sentimentalized in family histories, and draw counterintuitive conclusions, including:

Using powerful story-telling and unprecedented research employing big data and algorithms, Abramitzky and Boustan are like dedicated family genealogists but millions of times over. They provide a new take on American history with surprising results, especially how comparable the “golden era” of immigration is to today, and why many current policy proposals are so misguided.

Ran Abramitzky is professor of economics and the Senior Associate Dean for the Social Sciences at Stanford University, a research associate at the National Bureau of Economic Research, a senior fellow at the Stanford Institute for Economic Policy Research, and a former co-editor of Explorations in Economic History. Weaving his family story together with extensive economic and historical data, Abramitzky’s prize-winning book, The Mystery of the Kibbutz examines how communities based on income equality survived in Israel for over a century, and the conditions under which more equal societies can thrive.

Leah Boustan is professor of economics and director of the Industrial Relations Section at Princeton University. She is also co-director of the Development of the American Economy Program at the National Bureau of Economic Research, and serves as co-editor of the American Economic Journal: Applied Economics. Her prize-winning scholarly book, Competition in the Promised Land, examines the effect of the Great Black Migration from the rural South during and after World War II. She has written for The New York Times, The American Prospect, and Slate.

“The book reflects an ongoing renaissance in the field of economic history fueled by technological advances — an increase in digitized records, new techniques to analyze them and the launch of platforms such as Ancestry — that are breathing new life into a range of long-standing questions about immigration. Abramitzky and Boustan are masters of this craft, and they creatively leverage the evolving data landscape to deepen our understanding of the past and present.”—Washington Post

“Abramitzky and Boustan have made an immense contribution to our understanding the economic history of immigration and what it can teach us about upward mobility in the United States.”—Foreign Policy

“This wonderful and highly readablebook provides the facts and sets the record straight about the hot-button issue of immigration and is a must-read for anyone who cares about this important issue. Immigrants benefit from coming to the US, but so does the country from the diversity, skills, and energy that they bring. Remarkably, most existing evidence suggests that native workers are not harmed by immigrants.”—Daron Acemoglu, Institute Professor of Economics, MIT, and coauthor of Why Nations Fail and The Narrow Corridor

“In this fascinating book, Abramitzky and Boustan ingeniously employ the tools of data science to construct the first ‘big data’ account of immigration in America. Combining rigorous statistical analysis with thoughtful narratives, they weave a compelling story about how millions of immigrant families achieved the American Dream over the last century and a half. The result is a set of timely and concrete insights that will help reshape the narrative about immigration and opportunity in the United States.”—Raj Chetty, William A. Ackman Professor of Public Economics, Harvard University

“While Americans are intensely polarized about immigration, facts and history can help change minds. And Streets of Gold has the facts, millions and millions of them, about the amazing and often-surprising history of American immigration. It is a splendid testament to the power of big data to illuminate our past and what it means for the future.”—Angus Deaton, Nobel laureate, economics, and coauthor of Deaths of Despair and the Future of Capitalism

“Complex in its coverage, uplifting in its message, engaging in its composition, and powerful in its significance, Streets of Gold is a ‘New World Symphony’ in words and numbers. Immigrants today, as in the past, make a better life for themselves. But upward mobility comes through generations, and the success of the immigrant child does not come at the expense of the one with US-born parents. There is greater continuity and harmony in this version of the American Dream than discontinuity and dissonance.”—Claudia Goldin, Henry Lee Professor of Economics, Harvard University, and author of Career & Family: Women’s Century-Long Journey toward Equity

“With Streets of Gold, Ran Abramitzky and Leah Boustan have written a highly engaging book on the enduring but underappreciated success story of American immigration. Interweaving anecdotes drawn from many sources, including their own personal stories, with conclusions drawn from systematic big data analyses using tools from modern economic research, they paint a vivid and wide-ranging picture of the changes in immigration over time and the effects on American society. They take us to meet not only spectacular success stories like Tino Cuellar, who quickly moved from being born in Mexico to graduating from Harvard and becoming a justice on the California supreme court, but also the more common story of Louis Bilchick, whose family moved slowly but steadily up the economic ladder. Along the way, they separate fact and fiction and bust many of the myths that pervade and confuse the current discussion on immigration policy. As an immigrant and American citizen, I highly recommend this inspiring book for anyone interested in the debates on immigration.”

“Unprecedented data, empathetic personal histories, joyous writing, practical solutions, and a compelling counter-zeitgeist narrative make Streets of Gold an essential read for all Americans confused by the partisan rancor surrounding immigration. Abramitzky and Boustan demonstrate the travails of first-generation immigrants, the startling economic success of the second generation, the rapid pace of cultural ‘Americanization,’ the lack of wage threat to American-born workers, and the similarity of these patterns for the two waves of immigration bringing Europeans (in the late nineteeth century) and Latin Americans (in the late twentieth century) into our country. Despite all the rancor, we who are of immigrant heritage are reminded how remarkable a country is America.”—David Laitin, Watkins Professor of Political Science, Stanford University

“The optimism that runs through Streets of Gold—immigrants are and have always been a ‘grand bargain’ for America—is based on the rock-solid evidence of Ran Abramitzky and Leah Boustan’s rigorous deep dive into millions of census records and Ancestry.com filings. The stories they tell then become a powerful means of communicating the truth about the unique phenomenon of the American immigrant experience.”

“A book as timely as it is magisterial. Two of the most respected and accomplished scholars of economic history demonstrate that much of what you thought you knew about the historical experience of immigrants coming to the United States in the past turns out to be wrong. Armed with reams of new data, elegantly written, and meticulously researched, Streets of Gold revisits many of the most pertinent and perplexing social and economic issues in the history of immigration with often-surprising results.”—Joel Mokyr, Northwestern University

“Streets of Gold is the conversation you always wanted to have about where Americans come from. Abramitzky and Boustan have discovered new ways of answering that question in this fascinating and hard to put down history of American immigration, based on new sources of data, and conveyed by powerful storytelling.”—Alvin E. Roth, Nobel laureate, economics, and author of Who Gets What and Why

“Streets of Gold is a pathbreaking book. Mining a treasure trove of big data over more than a century, Ran Abramitzky and Leah Boustan manage to show the surprising continuity between past and present patterns of immigrant integration in the United States. Their data show that most immigrants, even across widely different backgrounds, achieve success over two to three generations, much as in the past. This book is a must-read for those interested in the role of immigration in American society.”—Andrew Selee, president, Migration Policy Institute

“An absolute treasure, the perfect book on immigration—substantive and data-driven, but leaving room for the stories of immigrants, good and bad. This is a timely book, but it will be read for many years.”—Zack Weinersmith, New York Times–bestselling author of Soonish

“Economists Abramitzky and Boustan mount a compelling argument for the success of immigrants in the U.S. for more than 100 years. Drawing on data documenting millions of immigrants from many countries, arriving with varying levels of education and resources, they find strong evidence of immigrants’ upward mobility, assimilation, and contributions to the economy and culture…A well-researched, informative contribution to a contentious—and often misinformed—debate.”—Kirkus

“[A] data-driven analysis of not just immigrants but also their legacies.”—Harvard Business Review

“[A] n important new analysis of the economic impact of immigration to the United States over the last century or more.”—Reason

“Migration myths are contributing to tearing our nation apart. This book, grounded on deep original research and made lively by moving personal accounts, is an essential read. It shows that little has changed in this salad bowl that is our country, neither the migrants’ travails nor their successes nor, sadly, the prejudices they encounter.”—Esther Duflo, McKinsey Summer Reading list

“The book brings reams and reams of data to tell the story of immigration to the US over the late 19th and 20th centuries and how it remade both the lives of migrants and the country itself.”—Vox