Reorganized Religion: The Reshaping of the American Church and Why it Matters (Hardcover) 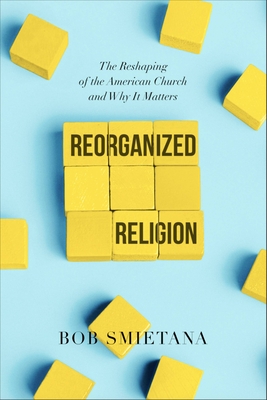 Reorganized Religion: The Reshaping of the American Church and Why it Matters (Hardcover)

“A superb examination of the future of Christian institutions…. A must-read for anyone invested in the fate of the American church.” -Publishers Weekly (starred review)

Uncover the ways the Christian church has changed in recent years—from the decline of the mainline denominations to the mega-churchification of American culture to the rise of the Nones and Exvaneglicals—and a hopeful reimagining of what the church might look like going forward.

The United States is in the middle of an unprecedented spiritual, technological, demographic, political and social transformation— moving from an older, mostly white, mostly Protestant, religion-friendly society to a younger diverse, multiethnic, pluralistic culture, where no one faith group will have the advantage. At the same time, millions of Americans are abandoning organized religion altogether in favor of disorganized disbelief.

Reorganized Religion is an in-depth and critical look at why people are leaving American churches and what we lose as a society as it continues. But it also accepts the dismantling of what has come before and try to help readers reinvent the path forward. This book looks at the future of organized religion in America and outline the options facing churches and other faith groups. Will they retreat? Will they become irrelevant? Or will they find a new path forward?

Written by veteran religion reporter Bob Smietana, Reorganized Religion is a journalistic look at the state of the American church and its future. It draws on polling data, interviews with experts, and reporting on how faith communities old and new are coping with the changing religious landscape, along with personal stories about how faith is lived in everyday life. It also profiles faith communities and leaders who are finding interesting ways to reimagine what church might look like in the future and discuss various ways we can reinvent this organization so it survives and thrives. The book also reflects the hope that perhaps people of faith can learn to become, if not friends with the larger culture, then at least better neighbors.

Bob Smietana is an award-winning reporter and Pulitzer grantee who has become one of the most respected and well-known religion reporters in the country, with more than two decades experience in covering religion, spirituality, and ethics. He has served as a senior writer for Facts & Trends, senior editor of Christianity Today, and the religion writer at The Tennessean. He is currently a national reporter for Religion News Service, where his wire service stories — which attract wide readership from lay people, pastors and scholars — have appeared in both secular and religious publications, such at the Washington Post, USA Today, Christianity Today, and the Associated Press.

His reporting on a small Episcopal church saved by refugees inspired the 2017 Affirm Films feature “All Saints,” while his reporting on young serpent handlers inspired the 2013 National Geographic television series Snake Salvation. In April 2021, his reporting on Beth Moore’s breakup with the Southern Baptists was a top story at Christianity Today and the second most read story at the Washington Post. On the day it was published, it was cited on the front page of the New York Times and prompted a national conversation about women in the Southern Baptist Convention. Bob has also reported on the troubles of Christian finance guru Dave Ramsey, the challenges facing megachurches like Willow Creek, end-times cat worshippers, and even a Nashville cult funded by “How Great is Our God,” one of the five most popular worship songs in the country, which attracted millions of page views and readers.

"Bob Smietana is one of the most well-respected journalists covering American religion. That reputation comes from decades of steady, unbiased, and truthful reporting about the subject that he loves. That passion and skill comes through clearly in Reorganized Religion. Drawing on his extensive networks of scholars, activists, and faith practitioners, this book stands a testament to where religion is and where it will be in the near future. This book serves as an authoritative work on the economic, political, social, and spiritual implications when churches close their doors across the United States."
—Ryan Burge, professor of political science, author of The Nones

"Disruption describes our times, and the church is not immune. Most of us can't recall in our lifetime a season with more disruption in the local church than now. How did we get here? Where do we go from here? These are questions I am asked constantly. Reporter Bob Smietana helps us with this important book. He describes the issues facing the church today with the precision of a journalist yet without trying to advocate for an outcome. If you want to understand how we got to the place we are and gain valuable information on how to move forward, you will want to read this book."—Ed Stetzer, Wheaton College

“Religion in the United States is changing dramatically, and veteran religion reporter Bob Smietana skillfully helps us navigate how we got here—and where we are headed. Using interviews, research data and other journalistic tools, he shows us how communities are dealing with America's reshaped religious landscape. Through a reporter's lens, he takes us on an illuminating journey to show us in detail how people of faith are finding new ways to imagine what religion can look like in a more diverse, pluralistic culture.”—Sarah Pulliam Bailey, religion reporter for the Washington Post