How Was That Built?: The Stories Behind Awesome Structures (Hardcover) 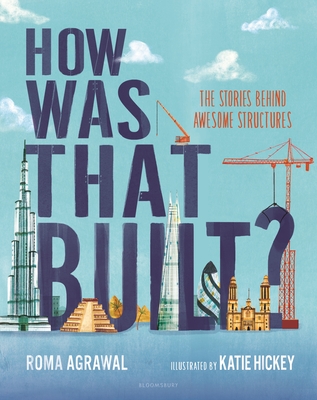 How Was That Built?: The Stories Behind Awesome Structures (Hardcover)

This striking book explains the feats of engineering behind the world's most impressive architectural marvels.

From skyscrapers that reach astonishing heights to bridges that span deep and wide rivers, the world is filled with awe-inspiring structures. But how do they work?

Meet the extraordinary people who challenged our beliefs about what's possible, pioneering remarkable inventions that helped build the Brooklyn Bridge in the US, the Pantheon in Italy, the Burj Khalifa in Dubai, the Shard in England and the Sapporo Dome in Japan. Discover the ingenious methods engineers have come up with to enable us to build underground, underwater, on ice, and even in space.

With text written by award-winning structural engineer Roma Agrawal and detailed full-color illustrations by Katie Hickey, this book provides unique and illuminating perspectives of the world's most incredible constructions. How Was That Built? is a perfect gift for curious kids who want to learn more about construction, architecture, science, technology, and the way things work.

This children's picture book also serves as a fascinating companion to the author's adult nonfiction book Built: The Hidden Stories Behind our Structures, winner of the AAAS/Subaru SB&F Prize for Excellence in Science Books.

Roma Agrawal is a structural engineer who builds big. From footbridges and sculptures, to train stations and skyscrapers – including The Shard – she has left an indelible mark on London's landscape.

She is a tireless promoter of engineering and technical careers to young people, particularly under-represented groups such as women. She has advised policymakers and governments on science education, and has given talks to thousands around the world at universities, schools and organisations including two for TEDx.

Roma has been awarded international awards for her technical prowess and success in promoting the profession, including the prestigious Royal Academy of Engineering's Rooke Award.

Roma has published articles on engineering, education and leadership, as well as being a television presenter. Roma is soon to appear on LEGO Masters on Channel 4, putting her engineering knowledge to use in judging structures built solely from LEGO.

BUILT is her first book.

"The book is perfect for Lego-obsessed fort builders in your life who spent their toddler years hovering near construction sites. Agrawal would also encourage you to give it to a child who hasn’t yet shown much interest in math and science, . . . who may not consider engineering for a career." - Smithsonian Magazine's THE TEN BEST CHILDREN'S BOOKS OF 2022

"Perfect for browsing by young readers with an interest in engineering or architecture." - WSJ

“A particularly engaging survey, both for its variety and its unusually expert perspectives.” —Kirkus Reviews