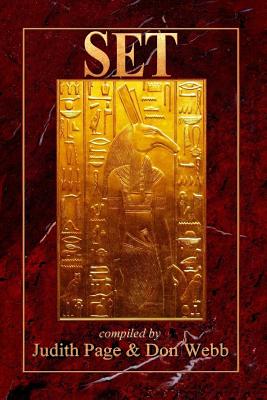 
Not On Our Shelves—Ships in 1-5 Days
(This book cannot be returned.)
'This book has taken 20 years in the writing... but Set has waited 5,000 years to tell the world his side of the story'. Drawing together from scholarship, religion, art and magic Judith Page and Don Webb have added considerably to the unfolding understanding of the figure of Set. Originally situated in the Egyptian culture the god Set has seemingly torn himself loose, finding an improbable contemporary interest and adherents. Rather than deny any of the attempts to apprehend this re-emergence of Set, Page and Webb have integrated, contextualized it, and most importantly given methods for you to create even greater meaning from this highly variable, mysterious and overpowering god. James Fitzsimmons High Priest of Set "This is an extremely interesting, thought-provoking and inspirational collection of essays and articles on Set by Judith Page, Don Webb and others. Here are diverse approaches to the deity, ranging from the contemplation of historical material through to considerations on meditational and magical working. The collection is profusely illustrated by examples of Judith's striking artwork and many historical diagrams and drawings that convey a wealth of information. A very absorbing and enjoyable read; and one which I would heartily recommend to anyone interested in finding out more about Set." Michael Staley, Starfire Publishing 'Behold, I am creating everything anew' Another landmark in the rise and rise of Egyptian Seth. Both authors are well-known advocates and devotees of this now, not so hidden god, whose influence on the modern occult revival is difficult to ignore. Co-author Don Webb, calls this his 'religious text' and what is on offer is a complete survey of the historical and mythic-field together with extended liturgy and rites, some reconstructed from ancient sources, some created anew. The book is illustrated throughout by Judith Page, who has also re-drawn many famous images or vignettes for the collection, together with informative essays, crucial topics for the mythos. I was particularly struck by Don's admonition that this book is for the hopeful; 'an antinomian stance on a polluted and troubled world' - despite which, a life affirming Seth is at work behind the scenes, creating wealth & reducing poverty Essential stuff. Mogg Morgan author "Phi-Neter: Power of the Egyptian Gods" Black & white Special edition: