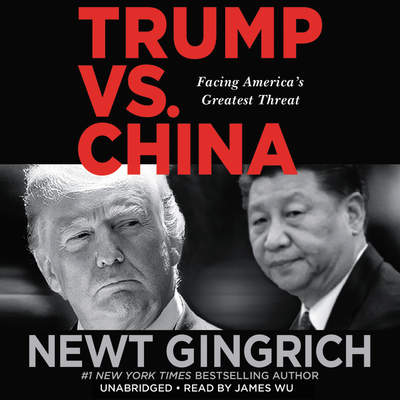 
Special Order—Subject to Availability
Former Speaker of the House Newt Gingrich sounds the warning bell that communist-ruled China poses the biggest threat to the United States that we have seen in our lifetime. The United States is currently engaged in a competition with the Chinese government unlike any other that we have witnessed before. This is a competition between the American system—which is governed by freedom and the rule of law—and a totalitarian dictatorship that is controlled by the Chinese Communist Party. These are two different visions for the future; one will succeed, and one will fail. It is possible for America to respond to the Chinese Communist Party's efforts, but doing so will require new thinking, many big changes, and many hard choices for our leaders in government and private sector. Newt Gingrich's Trump vs. China serves as a rallying cry for the American people and a plan of action for our leaders in government and the private sector. Written in a language that every American can understand but still rich in detail and accurate in fact, Trump vs. China exposes the Chinese Communist Party's multi-pronged threat against the United States and what we must do as a country to survive.
Newt Gingrich is a former Speaker of the House and 2012 presidential candidate. He is a Fox News contributor and author of thirty-six books, including fifteen New York Times bestsellers. Through Gingrich Productions, he has also produced and hosted documentary films. Recent films include The First American and Nine Days that Changed the World.
Praise for Trump's America:
"Newt Gingrich yet again shows that he truly understands my father, his historic victory, and his incredible presidency. A must read!"—Eric Trump

"This book is essential to understanding the genuine importance of this the upcoming elections. It matters!"—Rush Limbaugh