The Class Actions Controversy: The Origins and Development of the Ontario Class Proceedings ACT (Paperback) 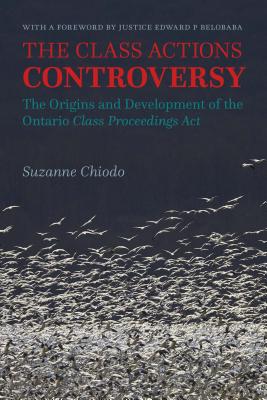 The Class Actions Controversy: The Origins and Development of the Ontario Class Proceedings ACT (Paperback)


Special Order—Subject to Availability
Winner of the 2019 Peter Oliver Prize in Canadian Legal History
Shortlisted for the Speaker's Book Award 2019 The Ontario Class Proceedings Act, 1992 represented a major innovation in civil procedure. Suzanne Chiodo's book is the first to analyze comprehensively the history of this highly significant legislation. It looks at the origins of representative proceedings in equity, the rise of modern-day class actions around the world (particularly in the United States and Quebec), and at the debates about the Ontario legislation. The book presents an in-depth analysis of the political and social influences that shaped this momentous legal change. It explains for the first time how the Attorney General's Advisory Committee Report in 1990 pulled together so many divergent interests where previous attempts had failed. With the twenty-fifth anniversary of the Act upon us, and the Law Commission of Ontario currently reviewing it, this is a timely contribution to a current debate as well as an instructive historical analysis.