Ayahuasca Visions: The Religious Iconography of a Peruvian Shaman (Paperback) 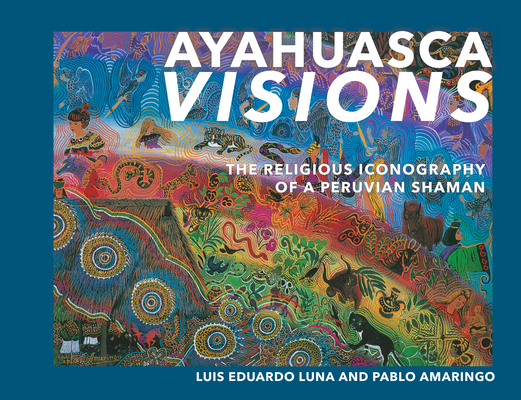 Ayahuasca Visions: The Religious Iconography of a Peruvian Shaman (Paperback)


Backordered
The mythologies and cosmology of Amazonian shamanism materialize in fantastic color and style in this unique, large-format volume, representing the fruit of several years of collaboration between a Peruvian folk artist/shaman and a Colombian anthropologist/filmmaker.
Peter César Amaringo practiced for many years as a healer in the Peruvian Amazon. Today he paints the visions he remembers from his shamanic practice and teachers young people to paint as director of the USKO-AYAR Amazonian School of Painting in Pucallpa, an art school he cofounded with Luis Eduardo Luna in 1988, where local youth are educated in the care and preservation of the Amazon ecosystem.

Luis Eduardo Luna was born and raised in the Colombian Amazon region. He earned his Ph.D. from the Institute of Comparative Religion of Stockholm University. He is a Guggenheim Fellow and Fellow of the Linnaean Society of London. The author of Vegetalismo: Shamanism among the Mestizo Population of the Peruvian Amazon, he has been a Senior Lecturer in Spanish at the Swedish School of Economics in Helsinki since 1979 and since 1986 an Associate of the Botanical Museum of Harvard University.
"Publication of these outstanding paintings of ayahuasca visions experienced by a native medicine man, Pablo Amaringo, and interpreted by the distinguished anthropologist Luis Eduardo Luna permits us to understand the unworldly psychic effects of the ‘vine of the soul.’"
-Professor Richard Schultes, Director, Botanical Museum of Harvard University

"Pablo Amaringo and Luis Eduardo Luna are to be congratulated for their collaboration. It has yielded a book that is both beautiful and sure to be an enduring contribution to the ethnography and art history of shamanism. The visions and vanishing lifestyles of the ayahuasqueros of Amazons are presented with wonderful integrity and sensitivity.”
-Terence McKenna, author of The Invisible Landscape (with Dennis McKenna) and True Hallucinations