Sport and the Law: Historical and Cultural Intersections (Paperback) 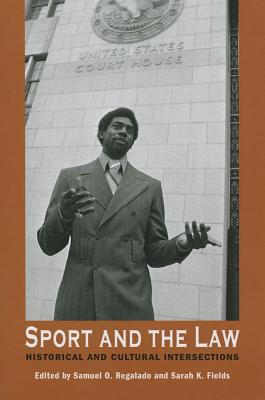 Sport and the Law: Historical and Cultural Intersections (Paperback)


Special Order—Subject to Availability
This new collection examines not only how athletes looked to the nation’s judicial system to solve conflicts but also how their cases trans¬formed the interpretation of laws. These essays examine a vast array of social and legal controversies including Heywood v. NBA (1971), which allowed any player to enter the draft; Flood v. Kuhn (1972), which considered baseball’s antitrust status; the Danny Gardella lower level 1948 case regarding free agency and baseball; Muhammad Ali’s celebrated stance against the U.S. draft; Renée Richards’s 1976 lawsuit against the U.S. Tennis Association and its due process ramifications; and human rights violations in international law with respect to the increased recruitment of underage Latin baseball players in the Caribbean region are a few examples of the vast array of stories included. Sport and the Law links these cases to other cases and topics, giving the reader the opportunity to see the threads weaving law and sport together in American society.
Samuel O. Regalado is professor of history at California State University, Stanislaus and the author or editor of four books, including Baseball in Nikkei America: From the Meiji to the Majors.

Sarah K. Fields is associate professor of communication at University of Colorado Denver and the author of Female Gladiators: Gender, Law, and Contact Sport in America.
“This engaging set of essays demonstrates how individual sports were changed forever when the law was brought to bear on practices that were thought to be so important that they needed no defense. One of the strengths of the essays is that they focus directly on how the law affected the lives of individuals and in so doing set the stage for new conditions that would affect players, officials, teams, leagues, fans, and even governmental jurisdictions for decades to come.” —Charles Korr, author of The End of Baseball As We Knew It: The Players’ Union, 1960–1981

“Free of legal jargon, this accessible book emphasizes the historical and cultural context that influences legal decisions and the reciprocal impact that sport, law, and the larger society have on one another. Recommended, upper-division undergraduates through faculty and professionals; general readers.”

“This book should be of great interest for sport historians and American studies’ scholars.”

“Sport and the Law is an exceptionally well- edited anthology of its kind. Unlike conventional sports law books that focus on the effect of law and case law on the field of sport, this refined specimen places sports case law into a comprehensive historical and cultural context that gives life to the legal decisions that have had a profound impact on American sport, law, and the larger society. The essays are written in a scholarly yet jargon- free manner that assumes no prior knowledge of legal, historical, or jurisprudential theory on the part of the reader. It is an easily accessible book that is a must- read for those interested in specific sports- law cases, the historical and social context in which they were adjudicated, and their ultimate legacy to sport and the United States of America. Sport and the Law should certainly be added to the list of textbooks for college programs of study in law, sport, history, and American studies.