The Hundred Thousand Songs of Milarepa: A New Translation (Paperback) 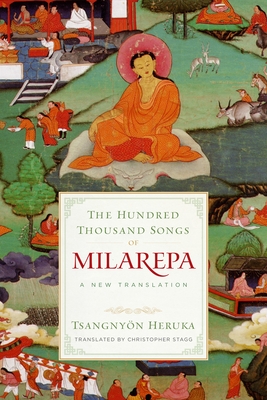 The Hundred Thousand Songs of Milarepa: A New Translation (Paperback)

By Tsangnyön Heruka (Preface by), Christopher Stagg (Translated by)


Special Order—Subject to Availability
An authoritative new translation of the complete Hundred Thousand Songs of Milarepa, the teaching songs and stories from Tibet's most beloved Buddhist yogi, poet, and saint.


Powerful and deeply inspiring, there is no book more beloved by Tibetans than The Hundred Thousand Songs, and no figure more revered than Milarepa, the great eleventh-century poet and saint. An ordinary man who, through sheer force of effort, faith, and perseverance, overcame nearly insurmountable obstacles on the spiritual path to achieve enlightenment in a single lifetime, he stands as an exemplar of what it is to lead a spiritual life.

Milarepa, a cotton-clad yogi, wandered and taught the dharma, most famously through spontaneously composed songs, a colorful and down-to-earth way to convey the immediacy and depth of the Buddhist teachings. In this work, the songs are woven into a narrative that tells the stories of his most famous encounters with his students, including Gampopa and Rechungpa, and recount his victories over supernatural forces in the remote Himalayan mountains and caves where he meditated.

In this authoritative new translation, prepared under the guidance of Dzogchen Ponlop Rinpoche, Christopher Stagg brilliantly brings to life the teachings of this extraordinary man. This classic of world literature is important for its narrative alone but is also a key contribution for those who seek inspiration for the spiritual path.
Tsangnyön Heruka (1452–1507), or the “Madman of Tsang,” so named for his eccentric behavior in yogic practice, compiled and arranged this most well-known collection of Milarepa’s songs four centuries after the death of the great yogin. Tsangnyön spent much of his life wandering in the same Himalayan regions as Milarepa and was considered by some to be his emanation.

Christopher Stagg serves as a translator and interpreter for the Nitartha Institute and Nalandabodhi, both under the direction of Dzogchen Ponlop Rinpoche. Also trained as a public school music teacher, he calls Seattle, Washington home.
"Through intensive practice under the harshest conditions based on pure and stable devotion to his guru, Milarepa gained mastery over his extremely subtle wind and mind and attained enlightenment in one lifetime. Then, rather than writing texts, he traveled about the country expressing his spiritual experiences in the form of songs. I am delighted that Christopher Stagg is offering a new translation of these important teachings and recommend it to seekers at all levels." —Lama Zopa Rinpoche

"I’m very pleased that this new translation of Milarepa’s Hundred Thousand Songs has been undertaken. Milarepa was a great yogi, and his words provide profound inspiration to all followers of the dharma. His songs are not only a preeminent symbol of Tibetan Buddhist culture, but they are a priceless repository of enlightened thought. I pray that this work may help lead countless beings to liberation." —His Holiness the Forty-First Sakya Trizin

"There is no equal to Milarepa in the Land of Snows, or perhaps even in the Noble Land of India. His Hundred Thousand Songs is the light of every practitioner’s heart, the inspiration for every meditator, and the example for every renunciant. This new edition will be a peerless companion for all future yogins and yoginis, inspiring generations of practitioners as it has for almost a thousand years." —Dzigar Kongtrul Rinpoche

"Milarepa and his songs have been perhaps the greatest source of spiritual inspiration for all Tibetan Buddhists. For a long time, there has been a need for a new and accessible translation of these extraordinary songs. Christopher Stagg has worked with contemporary masters of the lineage and his translation is accurate, lucid, and inspiring." —Ringu Tulku