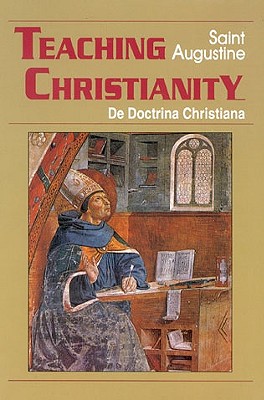 This is book number 11 in the Works of Saint Augustine series.

"Teaching Christianity is the most original book Augustine ever wrote. It is not so much a treatise or scholarly work but an instruction manual on how to teach Christianity. He wrote this how to book for those who would be preaching and explaining Christianity. It is entirely based on the bible and helps the reader express its truths of faith with soundproof methodology. It is a book that will help readers to communicate their message in a clear and effective way.

"Edmund Hill's new translation of Augustine's treatise On Christian Doctrine is superb. His early and mature thought on how to understand scripture and how to communicate that understanding to others is set forth clearly and attractively. The translator has shown great discernment in his choice of words and in their placement. This makes for a smooth reading. Extremely valuable are the scholarly endnotes provided after each of the four books. The new title chosen by Edmund Hill, namely, Teaching Christianity indicates that Augustine is here instructing the African clergy, probably the bishops, how to preach effectively to their congregations. The treatise is not focused on doctrine." Sr. Mary T. Clark, RSCJ Manhattanville College President, Society for Medieval and Renaissance Philosophy

Augustine of Hippo is one of the greatest thinkers and writers in the Western world. After becoming a Christian he was made bishop of Hippo in Africa, where he was influential in civil and church affairs. His more than 100 books, 200 letters, and 500 sermons have left a lasting impact on Western philosophy and culture. His classic and best-selling works include The Confessions, The Trinity, The City of God, and Teaching Christianity.