May It Please the Court (Paperback) 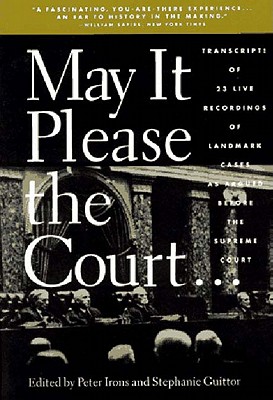 May It Please the Court (Paperback)

Until The New Press first published "May It Please the Court" in 1993, few Americans knew that every case argued before the Supreme Court since 1955 had been recorded. The original book-and-tape set was a revelation to readers and reviewers, quickly becoming a bestseller and garnering praise across the nation.

"May It Please the Court" includes both live recordings and transcripts of oral arguments in twenty-three of the most significant cases argued before the Supreme Court in the second half of the twentiethcentury. This edition makes the recordings available on an MP3 audio CD. Through the voices of some of the nation's most important lawyers and justices, including Thurgood Marshall, Archibald Cox, and Earl Warren, it offers a chance to hear firsthand our justice system at work, in the highest court of the land.

Peter H. Irons is emeritus professor of political science at the University of California, San Diego. He is the author of numerous books on the Supreme Court and constitutional litigation, including "Jim Crow's Children: The Broken Promise of the Brown Decision" and "A People's History of the Supreme Court." He is a co-editor of "May It Please the Court: The Most Significant Oral Arguments Made Before the Supreme Court Since 1955" (with Stephanie Guitton), "May It Please the Court: The First Amendment: Live Recordings and Transcripts of the Oral Arguments Made Before the Supreme Court in Sixteen Key First Amendment Cases," and "May It Please the Court: Courts, Kids, and the Constitution: Live Recordings and Transcripts of Sixteen Supreme Court Oral Arguments on the Constitutional Rights of Students and Teachers," all published by The New Press. He has also contributed to numerous law reviews and other journals. He was chosen in 1988 as the first Raoul Wallenberg Distinguished Visiting Professor of Human Rights at Rutgers University. He has been invited to lecture on constitutional law and civil liberties at the law schools of Harvard, Yale, Berkeley, and Stanford and at more than twenty other schools. In addition to his academic work, Irons has been active in public affairs. He is a practicing civil rights and liberties attorney and was lead counsel in the 1980s in the successful effort to reverse the World War II criminal convictions of Japanese Americans who had challenged the curfew and relocation orders. He was also elected to two terms on the national board of the American Civil Liberties Union.