Let the Law Catch Up (Paperback) 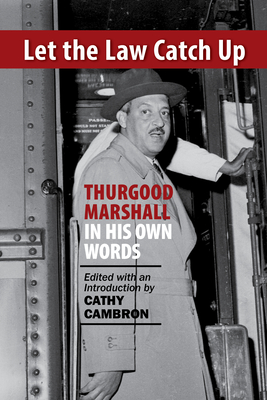 Let the Law Catch Up (Paperback)


Coming Soon—Pre-Order Now
In January 2021, as Kamala Harris was sworn in as vice president of the United States, she lay her hand on a Bible that had belonged to her hero Thurgood Marshall. A courageous and brilliant lawyer and jurist, Marshall won the 1954 Supreme Court ruling in Brown v. Board of Education, ending legal racial segregation in America--a significant step in the continuing struggle of Black Americans for equal treatment in their own country. In 1967, Marshall became the first Black Supreme Court justice, and he continues to inspire decades after his death.This accessible collection of Marshall's own words spans his entire career, from his fearless advocacy with the National Association for the Advancement of Colored People (NAACP) in the 1940s and 1950s, to his arguments as the first Black solicitor general under LBJ and his Supreme Court opinions and dissents. Introductions to the writings provide historical and legal context.
Cathy Cambron, JD, is a lawyer, editor, and writer. She previously edited and wrote an introduction for The Way Women Are: Transformative Opinions and Dissents of Justice Ruth Bader Ginsburg (Welcome Rain, 2020). Cathy lives in Asheville, North Carolina.