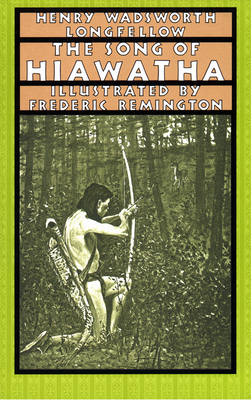 
On Our Shelves Now at:
In the summer of 1854, Longfellow wrote in his diary" I have at length hit upon a plan for a poem on the American Indians, which seems to me the right one and the only. It is to weave together their beautiful traditions as whole." What emerged the next year was "The Song of Hiawatha," a composite of legends, folklore, myth, and characters that presents, in short, lilting lines (who can forget "By the shore of Gitche-Gumme/ By the shining Big-Sea Water"?) the life-story of a real Indian, who provides the focus for the narrative thread of this epic drama of high adventure, tragedy and conflict. The aim was not to tell a particular or specific story but to unite the strands of various Indian legends, to present a sympathetic portrait of many Native American tribes, and especially to disclose their profound relationship with the natural world. This when both government policies and an expanding, land-hungry population were just beginning their inexorable campaign of displacement and annihilation. The poem received a decidedly mixed reception. Our own Boston Traveller revealed its biases: "We cannot help but express our regret that our own pet national poet should not have selected as a theme of his muse something better and higher than the silly legends of the savage aborigines." Despite this, the poem entered into our canon of great narratives, and was revived again in 1891 when Remington, surely the most renowned artist of the West, provided with new pen and ink drawings. This handsome new, and freshly reset, edition (the only unabridged version in print) presents the full text, includes the original Remington illustrations, and provides an index of the Indian names and their meanings.