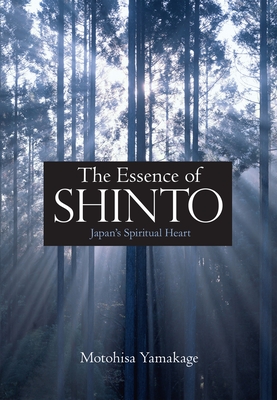 
Not On Our Shelves—Ships in 1-5 Days
In The Essence of Shinto, revered Shinto master Motohisa Yamakage explains the core values of Shinto and explores both basic tenets and its more esoteric points in terms readily accessible to the modern Western reader. He shows how the long history of Shintoism is deeply woven into the fabric of Japanese spirituality and mythology--indeed, it is regarded as Japan’s very spiritual roots--and discusses its role in modern Japan and the world. He also carefully analyzes the relationship of the spirit and the soul, which will provide informed and invaluable insight into how spirituality affects our daily existence. Through the author’s emphasis on the universality of Shinto and its prevalence in the natural world, the book will appeal to all readers with an appreciation of humanity’s place in nature and the individual’s role in the larger society.
MOTOHISA YAMAKAGE was born in 1925 and brought up in an old Shintoist family. At the age of eighteen he was initiated into the mysteries of Shinto, and in 1956 became the 79th Grand Master of Yamakage Shinto. Grand Master Yamakage has played a leading role in introducing Shinto to people around the world. Many of his essays, translated into German, French, and English, have been published in leading European magazines. In 2005, Motohisa Yamakage retired and was succeeded by his son, Hitoyoshi Yamakage.
"Renowned Shinto master Motohisa Yamakage takes us to the core of Japan’s most ancient religion." —Clear

"…will function as an introduction to ideal Shinto practice…"—Choice