The Longest August: The Unflinching Rivalry Between India and Pakistan (Hardcover) 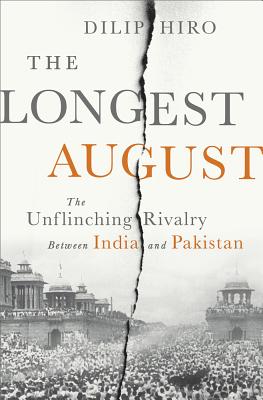 The Longest August: The Unflinching Rivalry Between India and Pakistan (Hardcover)


Special Order—Subject to Availability
The partitioning of British India into independent Pakistan and India in August 1947 occurred in the midst of communal holocaust, with Hindus and Sikhs on one side and Muslims on the other. More than 750,000 people were butchered, and 12 million fled their homes -- primarily in caravans of bullock-carts -- to seek refuge across the new border: it was the largest exodus in history. Sixty-seven years later, it is as if that August never ended.

Renowned historian and journalist Dilip Hiro provides a riveting account of the relationship between India and Pakistan, tracing the landmark events that led to the division of the sub-continent and the evolution of the contentious relationship between Hindus and Muslims. To this day, a reasonable resolution to their dispute has proved elusive, and the Line of Control in Kashmir remains the most heavily fortified frontier in the world, with 400,000 soldiers arrayed on either side.

Since partition, there have been several acute crises between the neighbors, including the secession of East Pakistan to form an independent Bangladesh in 1971, and the acquisition of nuclear weapons by both sides resulting in a scarcely avoided confrontation in 1999 and again in 2002. Hiro amply demonstrates the geopolitical importance of the India-Pakistan conflict by chronicling their respective ties not only with America and the Soviet Union, but also with China, Israel, and Afghanistan.

Hiro weaves these threads into a lucid narrative, enlivened with colorful biographies of leaders, vivid descriptions of wars, sensational assassinations, gross violations of human rights -- and cultural signifiers like cricket matches. The Longest August is incomparable in its scope and presents the first definitive history of one of the world's longest-running and most intractable conflicts.
Dilip Hiro is one of the world's leading experts on the Middle Eastern, Central and South Asian, and Islamic affairs. His thirty-four books include Inside India Today, The Timeline History of India, Inside Central Asia, and Apocalyptic Realm: Jihadists in South Asia. He contributes to the New York Times, Guardian, Observer, Nation, and Los Angeles Times as well as Salon, TomDispatch, and YaleGlobal. He is a commentator for CNN, the BBC and Al Jazeera English.
“An exhaustive narrative on Indo-Pak relations coloured by the burden of history...It is a bold, dispassionate attempt to examine the bitterly contested subject...The immensely readable book is peppered with catchy anecdotes linking senior leaders of India and Pakistan.” —Deccan Herald (India)

“The Longest August needed a mix of skill, patience and courage. Hiro exhibits them all in good measure, and happily takes the book above most Partition sagas.” —The Hindu

"In Hiro's retelling, Nehru, Mahatma Gandhi and Jinnah are alive with all their egos and foibles resplendent...The Longest August is a brave first attempt to magnify relations between India and Pakistan." —The Independent (UK)

“The author provides a riveting account of the relationship between India and Pakistan …The author weaves these threads into a lucid narrative, enlivened with colourful biographies of leaders, vivid descriptions of wars, sensational assassinations, gross violations of human rights - and cultural signifiers like cricket matches.” —Business Standard (India)

“Every new Dilip Hiro book brings a tingle of excitement over the chance to chronologically understand events in a particular land, almost always close to ours, by a meticulous storyteller who takes no sides.... The Longest August: The Unflinching Rivalry Between India and Pakistan remains true to Hiro's genre of storytelling, based on an intense examination of the archives and a reliable-enough timeline. This helps him recount the past as it happened, blemishes and all.” —Tribune India

“Hiro's book is a fluidly written narration tracing the prehistory of the conflict to Hindu assertion and Muslim anxiety as the independence struggle gathered pace. This is an eminently readable history that outlines the evolution of a complicated conflict.” —India Today

“The Longest August is an ambitious project, particularly in the vastness of its scope... Every major incident is touched upon in the book... Written in the style of the immensely popular Freedom at Midnight by Larry Collins and Dominique Lapierre, The Longest August is an easy read. It is full of anecdotes which have either been forgotten or overlooked.” —Indian Express

“The book is updated enough to include the Modi government's bizarre attitude to relations with Pakistan — a mix of hugging and sulking — and comprehensive enough to act as a single volume reference for India-Pakistan relations.” —Asian Age

"A definitive history of one of the world's most intractable conflicts. ... It is an absorbing read." —Bangalore Mirror

"Hiro amply sketches the geopolitical contours of the India-Pakistan conflict by chronicling their respective ties not only with America and the Soviet Union but also with China, Israel, and Afghanistan." —The Times of India

"The book is a must read to understand the predilections of the Hindu leaders in India and their Muslim counterparts in Pakistan which has deepened the trust deficit leading to a dead end. Or has it!" —Free Press Journal (Mumbai)

"Dilip Hiro's latest book is another proof of the maturity among the historians of the emerging independent countries... The writer tries to unfold the hidden politics of the unflinching rivalry between the twins and comprehensively covers both the pre- and post-partition developments... He has boldly challenged the politics of Mahatma{and] rightly pointed out that the Mahatma believed in religious nationalism, and gives the reference of Mahatma's 1915 address in which he said: 'Politics cannot be divorced from religion.'" —The News (Pakistan)

"This book is remarkable in its sweep of history... By sequencing the events in this manner, their flow becomes clearer. The facts presented are well-rounded, backed as they are by considerable background information. The portrayal of the key historical figures has been quite vividly done. It delineates the changing international context of evolving India-Pakistan relations and the drawing in of global powers with each major shift, thereby investing their bilateral developments with profound global balance-of-power ramifications." —Mainstream (India)

“[A] deeply researched book about partition and its consequences...The adversarial relationship between the homespun Mahatma [Gandhi] and the Anglicized barrister [Jinnah] is recounted in novelistic detail... This is a reliable, insightful and, for so partisan a subject, admirably evenhanded examination.” —Wall Street Journal

“A history that spans a century of antagonism, skullduggery and war...It is a tale of broken bloodlines, fatal miscalculations and mutual paranoia that has placed a bitter parting at the center of the destiny of a subcontinent. And it is timely... Hiro also offers fascinating accounts of the espionage wars between the two countries.” —The New York Times Book Review

"The book supplies enough detail to leave the reader in no doubt about the upshot of India's partition: a nuclear-armed quasi-theocracy imploding under the weight of its own radicalism. This should inspire dread in the most stolid of hearts — not only in India but across the world.” —Washington Post

“Brisk and clear history of partition and its effects... Mr. Hiro has written a highly readable account of a complicated history... A dispassionate chronological narrative, it is an excellent introduction to a bitterly contested topic.” —The Economist