The Sutra of Hui-neng, Grand Master of Zen: With Hui-neng's Commentary on the Diamond Sutra (Paperback) 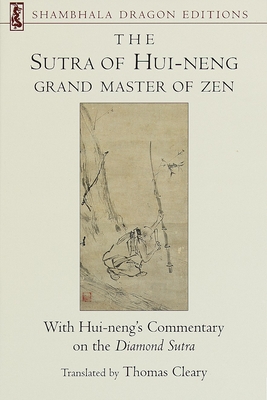 The Sutra of Hui-neng, Grand Master of Zen: With Hui-neng's Commentary on the Diamond Sutra (Paperback)


Special Order—Subject to Availability
Hui-neng (638–713) is perhaps the most beloved and respected figure in Zen Buddhism. An illiterate woodcutter who attained enlightenment in a flash, he became the Sixth Patriarch of Chinese Zen, and is regarded as the founder of the "Sudden Enlightenment" school. He is the supreme exemplar of the fact that neither education nor social background has any bearing on the attainment of enlightenment. This collection of his talks, also known as the Platform or Altar Sutra, is the only Zen record of its kind to be generally honored with the appellation sutra, or scripture.

The Sutra of Hui-neng is here accompanied by Hui-neng's verse-by-verse commentary on the Diamond Sutra—in its very first published English translation ever.
Thomas Cleary holds a PhD in East Asian Languages and Civilizations from Harvard University and a JD from the University of California, Berkeley, Boalt Hall School of Law. He is the translator of over fifty volumes of Buddhist, Taoist, Confucian, and Islamic texts from Sanskrit, Chinese, Japanese, Pali, and Arabic.
"The latest work from a distinguished and prolific translator is a new rendering of a celebrated Zen text, The Sutra of Hui-neng. This comes with what is stated to be the first English translation of Hui-neng's verse-by-verse commentary on the Diamond Sutra."— The Middle Way