Showings of Julian of Norwich: A New Translation (Paperback) 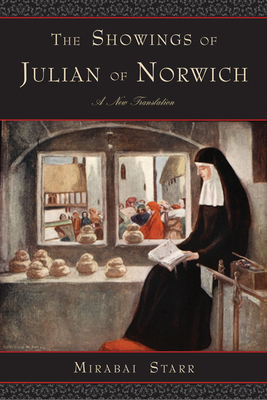 Showings of Julian of Norwich: A New Translation (Paperback)

A fresh and contemporary translation of one of the best loved and influential mystical texts of all time, The Showings of Julian of Norwich brings the message and spirituality of this 14th century mystic to 21st century readers.

Julian of Norwich, a contemporary of Geoffrey Chaucer, was an English anchoress in East Anglia. At the age of 30, suffering from a severe illness and believing she was on her deathbed, Julian had a series of intense visions of Jesus, which she recorded and then expanded on later in her life.

Her message for today's readers is simply this:

Daughter of the counterculture, Mirabai was born in New York in 1961 to secular Jewish parents. She has been an adjunct professor of Philosophy and World Religions at the University of New Mexico-Taos since 1993. Mirabai speaks and teaches nationally and internationally on the wisdom of the mystics and contemplative practice.

Mirabai Starr is a critically acclaimed author and translator of sacred literature. She teaches and speaks widely on contemplative practice, interspiritual experience, and the transformational power of loss. Her works include Dark Night of the Soul by John of the Cross, The Interior Castle and The Book of My Life by Teresa of Avila and The Showings of Julian of Norwich, Mother of God Similar to Fire (in collaboration with iconographer, William Hart McNichols) and Contemplations, Prayers, and Living Wisdom (Sounds True). God of Love: A Guide to the Heart of Judaism, Christianity and Islam positions her at the forefront of the emerging Interspiritual Movement.

"I spent the day with Mirabai and Julian of Norwich. Mirabai's translation--and most importantly, transmission--of Julian of Norwich is sublime. This inspired work reveals the immediate and undeniable Presence that knows itself as divine source and all that is born of Itself. I savored its humility and exaltation. I received its true welcome into the universal, sweet bosom of love. I recommend it with all my heart." -Gangaji
— Reviews

"As a major fan and promoter of Julian of Norwich, whom I call 'my favorite mystic', it is genuinely exciting to find such a faithful but freeing translation of Julian's long lost Showings. Now they are no longer lost--for anyone!" --Fr. Richard Rohr, O.F.M., Center for Action and Contemplation
— Reviews

"Julian of Norwich deserves as wide a readership as possible today for her wise, deep, and spirited telling of the Christ story along with the Motherhood of God. Her teachings are sorely needed to balance out the pessimism and patriarchal overload we find in today's culture and religion. Mirabai's translation is fresh and readable, helping to render Julian very alive and edgy still after all these years. We should all be thankful for this gift from Julian and Mirabai." --Matthew Fox, author of Original Blessing, A Spirituality Named Compassion, Hildegard of Bingen, a Saint for Our Times: Unleashing Her Power in the 21st Century
— Reviews

"Julian of Norwich's Showings shines with luminous mystical wisdom--and Mirabai Starr's lovely and engaging translation of this medieval masterpiece makes it more accessible than ever." --Carl McColman, author of The Big Book of Christian Mysticism and Answering the Contemplative Call
— Reviews

"In the Middle English original, Julian's expression was colloquial, vivid, and direct, shot through with lyricism and joy; Mirabai Starr has provided contemporary readers with a modern English rendering that is all of that. What a splendid gift!" --Carol Lee Flinders, author of Enduring Lives: Portraits of Women and Faith in Action
— Reviews

"Julian of Norwich's Showings shines with luminous mystical wisdom--and Mirabai Starr's lovely and engaging translation of this medieval masterpiece makes it more accessible than ever." --Carl McColman, author of The Big Book of Christian Mysticism and Answering the Contemplative Call
— Reviews